The Power of Positive Words 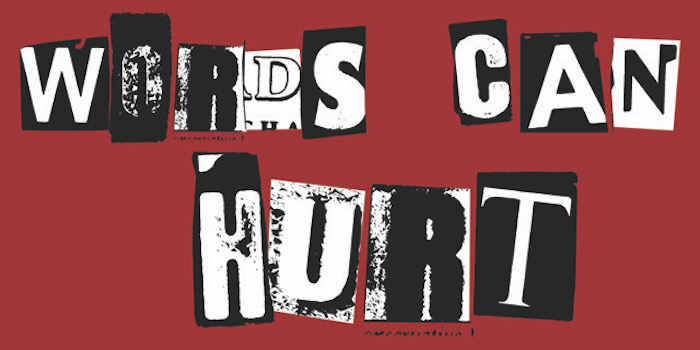 The old proverb/saying/schoolyard chant: “Sticks and stones will break my bones, but words will never harm me” is wrong and should be re-written:

“Sticks and stones will break my bones, and words can really harm me.” Words matter. Words can and do hurt and harm, especially if or when we are otherwise vulnerable through ill-health, or circumstance.

As I stood at the podium for yet another presentation at the Annual Dialysis Conference—this time in Orlando, Florida—a phrase I used carelessly in speech suddenly hit home! I was in the midst of introducing an under-appreciated issue in home haemodialysis, the patient who, by dint of time, circumstance, the passage of years, and an accretion of the barnacles of co-morbidity, is now struggling to safely sustain home haemodialysis, yet is fiercely determined to remain at home.

As soon as I said those words, I sought to reel them back, as if I could prevent them reaching the audience, but sound travels quickly—and always too fast for retraction. From then and throughout the rest of the talk, I was acutely attuned to other words, un-feeling words, none meant in that way, yet still, to some, undoubtedly insensitive…

“I need to mend my words!” I said to myself.

I returned to Australia, determined to blog “words,” or the injudicious use of them, but then, what are the words that hurt the most? I decided to ask Dori Schatell to poll the users of the Home Dialysis Central FaceBook discussion group to find out. Dori posed a simple request: nominate your pet word or phrase dislike... The outpouring was staggering, with each nomination carrying the added weight of hurt or insensitivity. I have selected several to highlight below.

But first, there is one word that keeps cropping up as a “dislike:” “patient.” While “dialyzor” is favored by some, it is vehemently disliked by others. “Client” is a term I personally dislike and refuse to use. And, while I have sometimes replaced “patient” with “user,” on reflection “user” sounds a bit like a drug-bust! So, “patient” it has to be, as I have nothing better. For those who dislike it, feel free to suggest another (barring dialyzor, user, or client) in the reply” section below.

Now, to the words that hurt. It seems that my two top personal “avoids” are the same as the patient-reported ones:

2. Compliance—in all or any connotation—especially when it is used to label patients as “non-compliant.”

We must stop using the words failure, failed, and failing, not just when linked to a dialysis modality, like: “he is failing home dialysis,” or “She failed home transfer,” but, also in the context of transplantation, as the use of “failed transplant” upset some patients.

I must say that this latter use had escaped me as being pejorative, but some patients felt strongly that to refer to a transplant as “failing,” or “failed” suggested a failure of personal duty of care to protect and keep the graft —a sense that somehow their “negligence” had led to its loss. While this can be so, it is not true for the vast majority of lost grafts, so, yes, we do need to watch our words!

More telling is when the word “failure” is applied in dialysis—and especially to home dialysis, yet use it we do, and regularly. No patient who goes home with dialysis—or who even considers or attempts home as a dialysis option—can ever be considered a failure. They are an astounding success for the bravery and resourcefulness of their endeavor. Yet, we repeatedly use the phrase to describe patients who have “failed home transfer,” have “failed home maintenance,” (short term, or long), or who have simply “failed” in any one of a myriad of ways.

It is easier for us to say “the patient has failed home care,” when it well may have been us —our failure to recognize gap(s) in the duty of care—that prevented the patient from remaining where s/he so desperately wished to remain: at home and within the comfort of familiar surrounds.

Clearly, this sense of failure, either on our part, or from the family dynamic, does not apply to all home patients. Some will be transplanted, some will fall ill and be content or feel more secure if transferred to centre-based care. Some may indeed transfer by preference. Most will likely leave home willingly, when the time comes to do so. But, there are some home dialysis patients for whom home is everything.

Even those who do willingly move in-centre should be honored for their past home management by encouraging the continuation of as much self-care as possible within staffed surroundings—avoiding the onset of the greatest “diminsher” of all: learned helplessness.

Words matter. Not only have I heard myself uttering unfeeling “mis-speak,” but we all do it, all the time.

Nothing appears to offend, raise hackles, or frankly anger a dialysis patient than to be labeled “non-compliant”. Nothing. In my view, too, non-compliance in dialysis is vanishingly rare. True, it does occur, but usually only in the setting of acute on chronic mental illness.

Henning Sondergaard, a clinical psychologist who has long been on home haemodialysis, listed the many words in his Thesaurus that are synonyms for compliant: submissive, docile, deferent, passive, resigned, adherent, tractable, obedient, acquiescent: none of which I would wish to be called—and nor does he! “…I refuse to be a passive, submissive, docile human being and resign my basic human rights,” writes Henning.

Perhaps most commonly, the term “non-compliance” is used to encapsulate the difficulty many patients have in managing the limits we try to impose on inter-dialytic fluid ingestion. But, if this is “non-compliance,” then it is a non-compliance driven by the short and brutal dialysis treatments we prescribe: short treatment time = rip off fluid at breakneck speed = drop blood pressure = revive with salt and water = seek hyper-contraction of the vascular volume in too-short a time = switch on the thirst mechanism = send the poor patient home, salt-loaded and with thirst maximally triggered.

I have blogged this toxic sequence before. Dori has also “de-frocked” compliance. So has Henning.

But beyond physiological non-compliance—something that is almost always the result of our poor practice, our ignorance, and not the fault of the patient—non-compliance has become synonymous with “difficult patients”; with those given to “tangential complaint;” with those who are “annoying information-seekers” (as if that is not their right, or place); and with those who time-consume. Sure, such patients can frustrate—of that there is no doubt—but an inquisitive patient seeking better understanding should be embraced, not ostracized. Yet, too often we do the latter.

Do I wear guilt here? Absolutely. Yet if or when I do, it is my responsibility as “the healer” to overcome my own shortcomings, and not blame the patient for being “difficult.”

They described these as buzz or bingo words that mask a big-brother “pleasantness” that grates and sticks in the craw. There was a strong feeling that while these grab-bag terms were often used with good intent, it was also apparent that their real meaning was often obscure, and that they tended to appear like “…big red balloons, pompous and full of hot air.”

Some felt it was not so much the words used but an attitude, recognizing that a word-set may rest well for one but antagonize another. Attitude mattered to many more than did terminology, and that is hard to argue against. But, while attitude can depend on time, place and circumstance (we all have good and bad days) robust rapport between patient and provider, be it doctor, nurse, or allied health, will survive the odd fractious moment. A mutuality of respect matters.

The word (or concept) of “patronizing” was deeply discussed … although what seemed patronizing to one was not held offensive by another. It seems that patronization is much in the eye of the beholder. But a common thread was the unwelcome use of smiley or sad face dots often used by clinics to mark biochemical result sheets and other “doing well” or “doing badly” information. It was invariable that these were seen as first-grader, and insulting. A simple explanation of reasons for and strategies to address variance, or outlier status, is far better than a primary school set of stars, smilies, or thumbs up/down icons.

The phrase “end-stage” or “ESRD/ESRF” sparked much debate. In favor: it is written into legislation and thus difficult to remove without a change in legal terminology. Against: the term CKD was much preferred, with lower reaches of CKD designated CKD5, or CKD5D (for dialysis). Some proposed that CKD5T be used for transplantation, though my own sense is that a transplant is a transplant, and the designate of CKD is no longer is relevant. Certainly, ESRD was preferred to ESRF, as the ‘F’ refers to failure, and the concept of failure is disparaging for many CKD and dialysis patients…

And…one word of my own. I have my own pet bête noire of a word: “barriers.” The home haemodialysis literature is littered with it: barriers to this, barriers to that, when in reality, these so-called barriers are opportunities seeking solution. It is such a negative word; so off-putting. It imparts a sense of: “hang on, this is all too hard.” Negative talk invites a negative reaction, and negative reaction inevitably promotes inaction. How can a good modality grow and prosper if all that is talked about are the barriers that prevent implementation? Think opportunities, seek solutions, create and innovate new ways. Be positive. Barriers suck!

At the end of the day, what was apparent from this most edifying set of posts is that the simple request to nominate your pet word or phrase dislike unleashed a torrent of intelligent, thought-provoking, and emotive discussion. Roughly 175 comments accrued in less than 9 hours and would have continued but that I drew a line under them and said enough. The to-and-fro was invariably courteous, and devoid of rancor or spite, though it did reveal the depths of hurt and confusion that the words we sometimes use unknowingly inflict on our patients.

While the Home Dialysis Central FaceBook discussion group is predominantly frequented by US-based patients, I was able to identify a number of responses from Australasia and the UK—the tenor of which bore no clear difference, region to region, in the interpretation of the language used to discuss CKD and dialysis, provider to patient.

Home dialysis patients—clearly the population responding here—are a resourceful, intelligent group. They understand that the words we use, person to person, in any walk of life or endeavor can be poorly delivered or misunderstood, that is a joy and curse of being human, but that was not the issue that emerged. What was abundantly clear was that if any two words should be used with greater care—or, arguably, not used at all—they are compliance and failure. One is pejorative; the other de-values.

My gratitude to Dori Schatell for facilitating such an instructive exercise, and to the many, many patients who contributed to it.