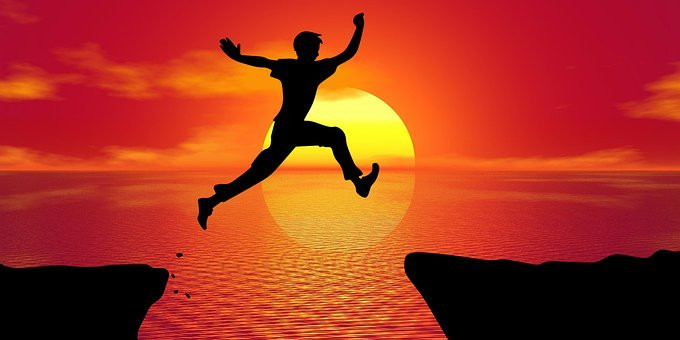 Reprinted with permission from the new CRDG blog.

This entry is the first in a new blog published by the Chronic Disease Research Group (CDRG) in Minneapolis, Minnesota. The goal of this blog is to give visibility into interesting news in the worlds of medical research and health care policy, especially insofar as those worlds intersect with the diverse areas of expertise among investigators at CDRG.

As many in the public know, CDRG has long been involved in nephrology research, including operating the United States Renal Data System (USRDS) Coordinating Center. I myself have returned to CDRG after having spent the past half-decade at NxStage Medical and Fresenius Medical Care North America. Unsurprisingly perhaps, I am always interested in the latest and greatest from the domain of observational (i.e., non-randomized) research about chronic dialysis. This time, I would like to discuss a fantastic study of dialysis population data from Europe.1

The topic immediately reveals a novel twist on an old topic. About 10 years ago, Robert Foley and colleagues here published a study in the New England Journal of Medicine about the long interdialytic gap, the roughly 72-hour interval between consecutive hemodialysis sessions on Friday and Monday or Saturday and Tuesday.2 In that study, which included over 32,000 patients, the mortality rate on the day after the long interval was 23% higher than on other days and the cardiovascular hospitalization rate was 124% higher. These findings were later corroborated by patterns of cardiovascular death in the Dialysis Outcomes and Practice Patterns Study (DOPPS) and the Australian and New Zealand Dialysis and Transplant Registry (ANZDATA).3, 4

One might hypothesize that if a 72-hour gap between consecutive hemodialysis sessions is deleterious for volume control and electrolyte (e.g., potassium) balance, then an even longer gap—a product of missing the first hemodialysis treatment of the week—is even worse. That is precisely the question that the new study by Fotheringham and colleagues aims to answer. The irony of the question is that the study at hand reflects the experience of patients in Europe, whereas the problem of missed hemodialysis sessions is of profound significance here in the New World. In a recent study from DOPPS investigators, the prevalence of at least one missed hemodialysis session per month was 7.9% in the United States—far above the corresponding prevalence estimates of 0.6% in a set of five large European countries and Japan.5

The authors of the study used data from the Analzying Data, Recognizing Excellence, and Optimizing Outcomes (ARO) cohort study of patients who initiated hemodialysis in one of 312 Fresenius Medical Care dialysis facilities across 15 countries in Europe. Patients initiated dialysis between 2007 and 2009—admittedly, quite a long time ago—and were followed through 2014. The study was limited to in-facility HD patients with thrice-weekly schedules that were clearly identified as Monday-Wednesday-Friday (MWF) or Tuesday-Thursday-Saturday (TTS).

The study included almost 9400 patients and approximately 3.8 million scheduled treatment days, but despite the volume of data, the design of the study was relatively simple. That’s an attractive feature, by the way. The design is nicely summarized by Figure 1 in the article:

The middle of the above figure is the “anchor.” In other words, each observation in the study is a scheduled hemodialysis session. That session might be attended—or not. Only those scheduled sessions that are preceded by perfect adherence (and the absence of hospitalization!) during the preceding 7-day interval are retained for analysis. And missed treatments on scheduled day at hand did not reflect hospitalization or death on that day, as such instances were excluded. After each scheduled session, patients are followed for 48 to 72 hours to assess the incidence of death and hospitalization. In other words, the authors took the phenotype of a dialysis patient with stability in the outpatient setting, tested whether a “surprising” missed treatment was associated with poor outcomes, and finally assessed whether the day of the dialytic week influenced the strength of that association. 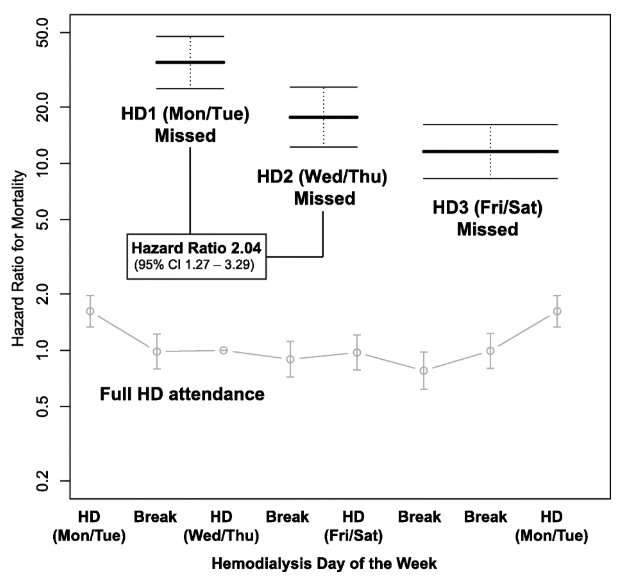 Notice immediately that the vertical axis is a logarithmic scale. In other words, patients who miss treatments have 10 to 50 times the mortality risk of patients with perfect adherence. Patients who miss the first hemodialysis session of the week are at the very highest risk, whereas one might say that patients who miss the last hemodialysis session of the week are at “less profoundly” elevated risk. As an aside, it should be noted that in patients with perfect adherence, risk of death is highest after the first day of the hemodialysis week. That’s an interesting observation, as these patients attended not only all three session during the previous 7-day interval, but also the session on the scheduled day at hand. One cannot help but wonder if aggressive ultrafiltration is the culprit, although that’s a question for another study.

Hazard ratios of hospitalization are shown below: 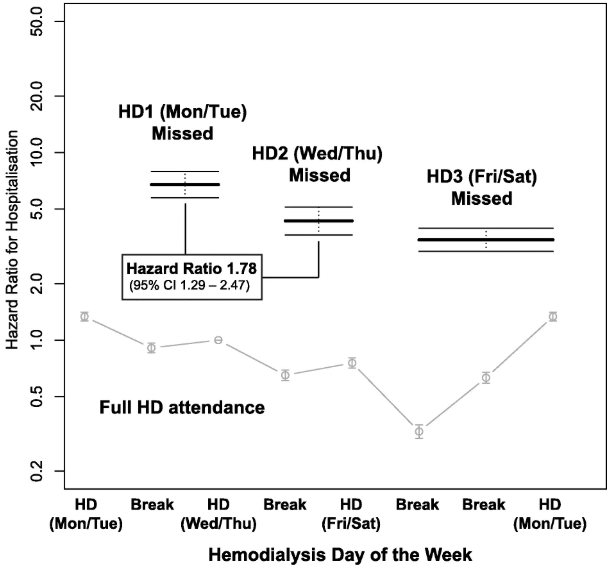 This is an observational study, and like all such studies, it is possible that confounding factors are chiefly responsible for the patterns in the data. The authors proffer that “acute illness which both prevents attendance for scheduled dialysis and leads to hospital admission or death” could be a culprit. It’s responsible to acknowledge this possibility.

However, the reality of the accumulated literature is this:

The proximal challenge facing dialysis in the United States is addressing missed treatments, especially on the first day of the dialysis week. Providing resources to ensure transportation to and from the dialysis facility and providing patients with treatment reminders via text message are two of many options that ought to be embraced.8 Interventions that lower the frequency of missed treatments are likely to confer positive effects on the risk of fluid- and electrolyte-mediated cardiac events. Considering the strength of associations in this study, one might argue that missed treatments on the first day of the dialysis week ought to be “never events” that are assessed in quality measurement systems.

The broader question is what to do about all the interdialytic gaps. Wider utilization of peritoneal dialysis (PD) in incident end stage kidney disease patients would be an excellent start, as the continuous nature of PD eliminates the very concept of the interdialytic gap. Frequent home hemodialysis is another solution, albeit far from a universal one. What can be done for patients who cannot or will not dialyze at home? As a population-wide intervention, frequent in-facility hemodialysis tends to exhibit low cost-effectiveness, as demonstrated in international literature.9 However, a one-size-fits-all solution is the problem, not the solution. As Hostetter recently wrote, “[D]ialysis care must be one of the least ‘personalized’ sectors of current health care.”10 We need to continue designing systems that facilitate adaptations of in-facility hemodialysis for risk-stratified groups, such as:

The first category of patients can continue to dialyze thrice weekly, but the second category of patients will require every-other-day dialysis, thereby creating demand for Sunday shifts in dialysis facilities or community houses for “drop-in” self-care hemodialysis. The last category of patients is the most complex to manage, as they will require four to six treatments per week. Can all these patients be treated at home? That is unlikely. Could these patients mix in-facility and home treatments? With appropriate financial resources, that is possible. What seems clear to me is that business as usual, with almost universal application of thrice-weekly hemodialysis, will continue to produce sawtooth patterns in daily rates of death and hospitalization.