This blog post was made by Malcolm Macdonald on January 25, 2018. 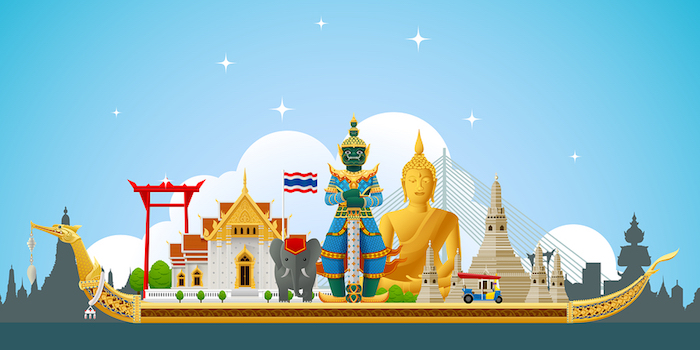 My stomach was starting to object to the continuous intake of spicy food, so it was time to back off and have just a cup of black tea the next morning before my second dialysis run here. They were so poor here that a public patient only got two 4-hour runs a week.  By god, we are lucky!

That night, our hosts discovered a new club, as a friend was singing there. Atlas was a rooftop dry season bar with incredible views, cocktails and mocktails, and a band.  The highlight before leaving was an evening visit to the huge (Golden) Shwedagon Pagoda, which was awash with tourists and worshipers.  We gave our tributes and felt blessed.  The best part was stumbling upon a huge Bodhi tree.  A fearsome looking policeman gently reached up, took one of the leaves and gave it to me for good luck. 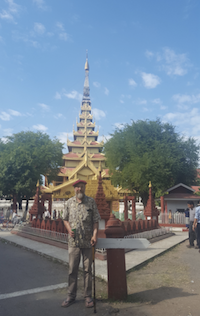 We boarded a plane for Mandalay. My romantic image of Mandalay was shattered as we arrived from the freeway into the city: its appearance was nothing like I expected. We were staying a bit away from everything and soon learned that you need the nearest crossroads for drivers to have any idea of where to go.  Also, food did not have to be served hot in Mandalay, nor was there hot water in the showers! We did not need an alarm, as a pack of dogs woke us up when the early morning train went past.

Sorting dialysis out on the ground with the hospital was a nightmare, and a valuable lesson to make sure that I carry hard copies of everything that was sent.  Three of the four hospitals claimed they had not received any paperwork from my clinic!  At Yangon, I had requested a copy of their blood certificate result stating that I had no nasties, and this was all Mandalay really wanted but there was confusion on the phone because of the language barriers.

We asked for a recommendation for a market that turned out to be a shopping complex!  We needed lunch, and a local business man showed us to the good restaurants. We wanted to buy a lacquered walking stick to replace one I had lost in Yangon, and stumbled across a local gem trader, Allan, who rang his daughter, and she told him where to go.  Allan drove us clean across Mandalay and back to our hostel with a wooden stick. The generosity and the two who helped us there turns out to be typical of these people. 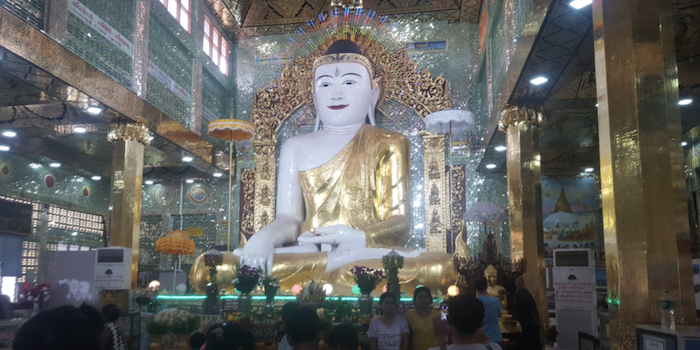 I finished dialysis and went to the Golden Palace, the seat of the last Burmese King before the British drove them out. On the way there, we passed an open air restaurant, so we returned to it. Amazingly, it was exactly what we were after—and only 3 dollars!  By now, we were starting to get under Mandalay's skin and becoming enthralled by the narrow streets, overhangs, and endless roadside stalls.  We wanted to stop at every one.

On our 3rd day, we booked a tour of the three ancient cities that preceeded Mandalay, which turned out to be very long, 11 hours, and an intense day.  But we squeezed in a lot.  A boat ride took us across the river, then we had an uncomfortable buggy ride to the Teak Temple that we remember as the best part of the day! We crossed the Peace Bridge, climbed up a steep hill to another Pagoda, and were swamped by 1,000s of tourists and locals on the longest wooden trestle bridge in the World.

New Years Days was a rest day.  Schedules, sightseeing and all the hustle and bustle really took their toll on us. I booked a car in the morning while Donna had a break, and went up to the Temple on top of Mandalay Hill.  Unfortunately, it was raining, which obscured the famous view. Everything was closed, including the Jade Market.  Even though we were in a Buddhist country that celebrates New Year in April, and the Chinese New Year was still quite a few weeks away, it was still a holiday. I was disappointed until my driver took me to an amazing, really old traditional market. I did a little shopping, and when I came back to the car, the rickshaw man whose bamboo hat I had asked about earlier came up.  He had a new hat on and gave me his. Despite my insistence, he refused to take anything for it.

Our final stop was an early lunch at our Golden Palace Café for the best sticky rice and banana I have ever had.  I was honoured with being given the method for making them. Then Donna went out shopping, so I hit the sack. Later, she texted me to ask if I wanted to go to Mandalay's famous Marionette Theatre, which was amazing, very beautiful, and a great highlight for our last night here.

I got up at 4:50am for my final dialysis session at 6am.  I met Donna and we headed for the plane: our adventure was over. I know that returning from such a poor country and its politics, but such wonderful and generous people will, has changed me—for the better, I hope.

When dialysing, the language barrier was a huge issue. On my last two runs, they got confused about my weight and left more than a kilo on each time, leaving me heavy to come home, and leading to a hospital stay. You can't be too critical—I was going to clinics that were so poor. These were not Western conditions. They work incredibly hard and take shortcuts or actually jig things to keep going.

When they were finished with my shift, there were two more shifts to come.  They start at 5 or 6 in the morning and go through to 7 in the evening: three runs non-stop!

They were incredibly efficient.  For example, on my last day I had to start early at 6 am so I could catch the plane home.  I arrived at 6:05 and had 10 minutes to get on, 4 hours of dialysis, and 10 minutes to get off. They had me out of there at 10:25! And, this was typical of most places: No mucking around.

You pay for everything, but by our standards often this is not a lot.  In Yangon, the blood test for HIV and Hep B only cost 4.00 USD. Be careful of what you ask for, though. They are willing to oblige, but chances are it will all be on the bill when you leave! A packet of Strepsils was 1.95 USD. A blanket to keep me warm was 6.00 USD!

Organizing Dialysis on My Trip
I could not rely on travel holiday web sites, which directed more to “medical tourism.” So, I scouted my own, and was lucky to have some contacts.

First, I checked places I was travelling to a for a hospital, then I looked to see if they had a nephrologist.  If they did, there was a good chance that there would be dialysis.

Making contact was the difficult part.  Most of these hospitals had an official whose job was to handle outside enquiries.  I suspect the only person who could speak English got this job.  So, most of the time I was never dealing directly with the renal department.  The emails tended to be terse and obscure; they were very happy to have me, but no detail.

The dialysis unit knew I was coming, but none of my emailed paperwork was there.

In both Bangkok and Yangon, I was saved by my cousin's doctor, who helped get me into hospital. Double-booking can be a good idea.  I had booked a morning run months earlier at a unit north of Bangkok, near where we were staying. They rang several days ahead to say that they could only do me at 6 pm.  This was no good, as we had planned to be in Kanchanaburi by then.  So, I rang the other hospital in Bangkok and they were ready to go at 7am.

Most places only convert to US dollars, so you have to know what they are worth:

I thought I had this trip well planned and down pat. Most places seemed only interested in my last run sheet, drug list, and bloods, including the nasties certificate.  There were some real lessons for us:

The final thing I want to say is I could not have done this without the support of the Home Training Unit at Rotary House, especially Janeane.  The other person I would not been able to do it without is my love fiancée Donna.

Five days in Box Hill hospital have passed, as I needed some sorting out, and I am finally discharged to stay with Donna. The bus nearly has me home.  Feeling a bit stiff and numb. Off to see doctor.  All good.  Short taxi ride, home!