I Will Not Let This Illness Define Me – Part 1 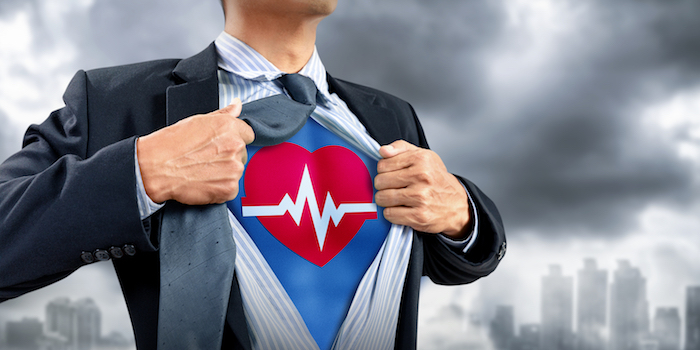 I hadn't realized that it was possible to feel numb, terrified, and nauseous all within the same heartbeat. But here I was, feeling all three. My GP at least had the good manners to look just as mortified as I felt.

I was living in London and working as a software engineer, building financial software systems. It was a pretty demanding job, I'd work 80-100 hours every week and party just as hard when I wasn't working. It was just what you did back then. I used to like to joke that I was burning the candle at both ends and in the middle.

That winter had been particularly tough. I'd developed a bad cough at exactly the worst time; we had a looming deadline and so I gulped down Lemsip after Lemsip in the hope of delivering our project on time. I don't know for certain if that's what triggered my autoimmune response, but my doctor believes an untreated strep throat infection somehow triggered my dormant FSGS.

A few mornings previously, around February 1993, I had woken up feeling particularly rough with my face noticeably swollen, and realized I couldn't put off going to see my doctor any longer. He sat me down in his office looking very serious, and told me he was going to do a proteinuria test (at this point in my life, I had absolutely no idea what that was), but that he wanted me to prepare myself for the strong possibility of kidney problems.

The test confirmed that I was leaking significant amounts of protein and would have to go to hospital to get further tests done and possibly a kidney biopsy. I had no idea what that was, either, but was sure it would be pretty horrific. I remember thinking to myself, “I will never have a biopsy.” I left—and he scheduled the appointment.

One thing that I had told myself early on, was that I was not going to let this illness define me. I moved, with my job, to the United States in 1997 and got married in 2000. 2001 saw the birth of our first son and 2003 the birth of our second son.

Between 1993 and 2000, I tried numerous different drug combinations: prednisolone (prednisone in the US), cyclosporin, azathiaprine, cyclophosphamide, to name but a few. Some drugs were more successful than others, but inevitably, they either became too toxic to continue or other side effects became so serious they risked causing permanent liver damage, etc. I spent 1 ½ years trying to follow a completely macrobiotic vegetarian diet, and a year taking Ayurvedic medicines and visiting Chinese, Indian and Western healers in an attempt to prolong my health as long as I could. None proved to have any effect and in 2000, my nephrologist told me that I would very soon need to start dialysis. Knowing that I was very averse to the idea of needles and hemodialysis, he recommended peritoneal dialysis. I got the catheter surgery in 2000 but was able to fend off dialysis for another year. I started PD some time in 2001. Dates and events from around this time are very hazy, a lot of it, if it wasn't for people in my life telling me about what happened, I'd never know what transpired!

When I first got the catheter installed, I also became active on the Lankanau, PA transplant list. In August 20th, 2004, I received the call and this time it was meant to be and I was transplanted successfully. The kidney started producing urine while I was still on the operating table; it was all looking very promising. Sadly, it was not to be. Due to a mix-up in my antigen cross match, I did not receive the correct medication regimen and, to cut a long story short, I lost the transplant in October that same year. It had shut down about 6 hours after leaving surgery and never recovered despite a lot of effort on the part of the transplant team at Lankanau. When they removed the kidney, they found thrombosis and necrosis of the tissue surrounding the kidney. I immediately started to feel better and was able to at least keep down solid food. Back to PD I went.

I never really felt well on PD. I started doing CCPD, for, I think, 9 hours per night. Over time, my numbers were declining and my doctor repeatedly increased my dwell time adding in numerous daytime manual exchanges. By the time I received my transplant in 2004, I was filling 3500ml exchanges plus 3 manual exchanges of 3500ml daily.

The second transplant call came November 30th 2005. This time, I was listed at the University of Penn in Philadelphia. The transplant was a great success and I felt better immediately. At the 6 month mark, evidence of rejection revealed itself during my testing, and a biopsy confirmed that my FSGS was back, aggressively attacking my kidney. Things went downhill quite quickly after that and in another 6 months, I was faced with the reality of dialysis again. This time, having had 4 abdominal surgeries and 2 cases of peritonitis, PD was not an option and so I reluctantly agreed to get my veins mapped in preparation for a fistula.

When the results of the mapping came back, they told me that the surgeon was concerned that, due to my small build, my veins would be too small to sustain the fistula. They said, ultimately, it was up to me. I chose to go ahead and get the surgery. At the same time as the surgery, I had a neck catheter placed. I started in-center hemo that same week.

I am having a hard time remembering enough about those first weeks to say something meaningful. The truth is, I don't remember details, just feeling like a waking horror movie. Horrible anxiety, crippling headaches and cramps. Eventually, it seemed to stabilize and I was able to function well enough to go back to work. I know, looking back on it, I was not operating effectively, but I was blessed that my team and my management understood what was going on and didn't put any pressure on me. All the pressure I felt to function and perform was self-inflicted.

After about 8 weeks, I think, they started using my fistula and we entered a new fresh hell. I learned a new word: Infiltration. All I can say about that is that it's not as bad as peritonitis!

During my routine physical, I got an EKG that showed an irregular heart rhythm. I had a stress test and numerous other tests that I couldn't name. I was diagnosed with left ventricular hypertrophy. At least I was learning new and interesting sounding words on my journey!

I continued attending the dialysis center for a few more months, until, one day, as I was driving home after treatment, I started to feel dizzy and disoriented. This wasn't a new phenomenon, I had been experiencing feelings of dizziness intermittently for some time. This time, though, it didn't pass like it had done on previous occasions...