I Will Not Let This Illness Define Me – Part 2 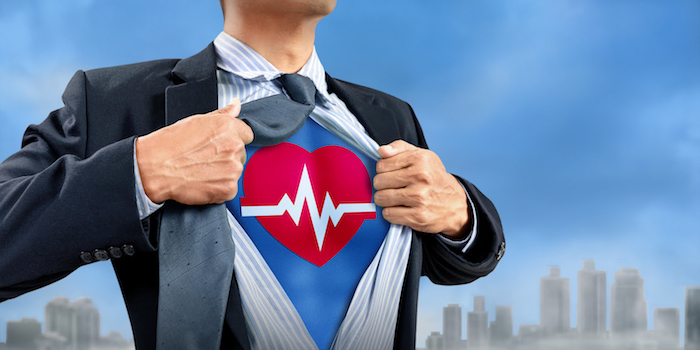 When I arrived home, one of our neighbors was waiting for me with her printer and laptop. She needed assistance getting them to talk to each other and knew I was good for it. I have absolutely no recollection of any of this; I only know what my wife and sons have told me. Apparently, my wife and neighbor came to check on me to see how things were going. I was sitting performing the same action with the mouse over and over again, just staring at the screen. My wife told me to go lie down. I started up the stairs to do so and the next thing I know, was lying on my back surrounded by paramedics and worried faces. I had lapsed in to a diabetic coma for just a few moments. I'm not diabetic, but the in-center treatment had been so aggressive that it had induced it. I didn't know or understand any of this, at this time. The worst thing about this entire episode was that my two very young sons had been the ones to find me in this unresponsive state. That took a long time for them to get over.

Unbeknownst to me, my wife had been talking with a woman she met online about something new and exotic called home hemodialysis. The idea was, you would become responsible for your own care, stick your own needles and run your own treatments 5 days per week. It sounded like a terrible idea to me—which was just my fear talking. I couldn't deny that my health had diminished dramatically and that things were seriously not working out with in-center treatments, I had no appetite, was constantly feeling unwell, couldn't function/think at work and on top of that, had LVH, and could possibly have another attack at any time. I reluctantly agreed to “consider” it. We discovered that my current clinic and nephrologist did not have a home program and had no plans to start one.

Again, my wife's powers of persuasion triumphed and I agreed to find another clinic and nephrologist that did have a home program. This is how I came to become a patient of the Davita Radnor@Home program.

We met with the home dialysis nurse, Maria, and immediately hit it off. She just made it a little bit less traumatic because she would do things like do a little salsa dance when we got something right, or a stick went well, etc. That was, until she told me I was going to have to stick my own needles this time. Then she wasn't nice any more. Just kidding, of course. But she did tell me she deliberately didn't warn me in advance so I wouldn't panic and/or not show up.

That stick was easy. That was weird. All this fear, anxiety, doubt about being able to do it completely refuted in 5 seconds flat. I wish I could say every subsequent stick was that easy, but gradually, over the months, I became quite proficient at sticking my own needles. The anxiety and fear slowly abated.

Within 2 weeks of running 5 short daily treatments at home, using a much slower pump speed, I started to feel clear headed and energetic and hungry, like I hadn't in years. I stopped taking all my blood pressure medications at the same time; my blood pressure without medication was now completely normal. At the 6-month mark, I went for another EKG and a stress test. The news was better than I could have ever hoped; there was no sign of LVH in any of my scans.

By this point, I had developed mature buttonhole sites for my cannulation. This was amazing, I didn't even have to use sharp needles to stick myself and somehow, it would stop bleeding and still be easy to stick again at my next treatment.

I had been coaching both of my sons’ soccer teams, and that had really rekindled my passion for soccer. A friend who was a goalkeeper and around my age told me there was an over-40 soccer league and was I interested in playing? The home hemo had been so successful that I had been going from strength to strength, and now I really felt like I could play, for the first time in two decades. I didn't exactly play like Pele on my first (or even 20th) game but slowly and surely I started to develop stamina and enough endurance to be able to play a full game without feeling like my heart was going to explode.

I received a job offer that would take me to Manhattan. It was a pretty good offer, but one very obvious obstacle was that it would be completely impossible to manage those sorts of work hours, commuting to NYC and short daily treatments. I had been hearing about another type of home hemodialysis that some people swore by, called nocturnal home hemodialysis. The idea was very intimidating, but it sounded like it might solve my problem for me. If I could connect at night and do my treatments while I slept, maybe I could make it work?

I called my doctor and he agreed to talk to me about it. He explained that it wasn't officially sanctioned for use with the NxStage machine, but with the right extra equipment, he trusted my ability as a now responsible and well-educated patient to be able to manage it. He acquired a heparin pump and a blood leak detector for me and we started the planning for starting nocturnal hemodialysis. This was early 2008. Ultimately, I turned the job down, but stuck with the plan to start nocturnal hemodialysis.

It was surprisingly easy to convert from short daily to nocturnal hemodialysis. A new cartridge type, a slight tweak to my prescription, a new heparin pump and a blood leak detector that I absolutely loathed as it generated so many false positives that I quickly discarded it and haven't used one since. I certainly don't recommend that for everyone, but I can tell you that in the 10 years I've done nocturnal hemo, I have never had a problem with blood leaks or cables that would be detected by a blood leak detector. If I'd had to keep using the detector, I doubt I would ever have managed to get a proper uninterrupted nights sleep. The hardest thing was adjusting to being able to sleep with the machine noise and the cables, etc. It was definitely challenging for those first few weeks and months. I know my now ex-wife struggled to sleep with the noise and it definitely disturbed her more than it did me.

When we first decided to do home hemodialysis, my wife and I had both agreed that I should be my own primary caregiver because we wanted to be sure I could be as self-sufficient as possible. If she was sick, or had to go away on business, or visit family, etc., I needed to be able to handle my own treatments. So, from the very beginning, I managed my own treatments and did all the preparation and teardown myself.

Fast forward to today, and here I am 10 years later. I love doing nocturnal home hemodialysis and still don't need blood pressure medications or have heart issues. The only medication I have to take is for my PTH which I traditionally have a hard time controlling. I don't need to take many binders (I still take them occasionally so that I can enjoy certain foods). I'd rather take Sensipar than have surgery to remove my parathyroid glands.

I haven't even really talked about how I don't have to watch my dietary or fluid intake. I say “really” because I do still have to exercise moderation, particularly with respect to potassium and phosphorous, but if I want a banana split, I can treat myself to one. But as my father was always fond of saying “Moderation in everything, including moderation.”

I'm very lucky to have had an excellent support team with Kim, Dr Glickman & the rest of the team at Davita Radnor.

I owe all of my good fortune to Wilma, Nicolette and Maria, the 3 people who were responsible for me starting to down the path of home dialysis and will be eternally grateful to all three of them for making it a reality for me. I know my boys feel the same way for being given back their father. Actually, for giving them a father period, because they had never known anything other than a sick father who was not getting better. Now I get to play soccer with them and see them grow up. How amazing is that?