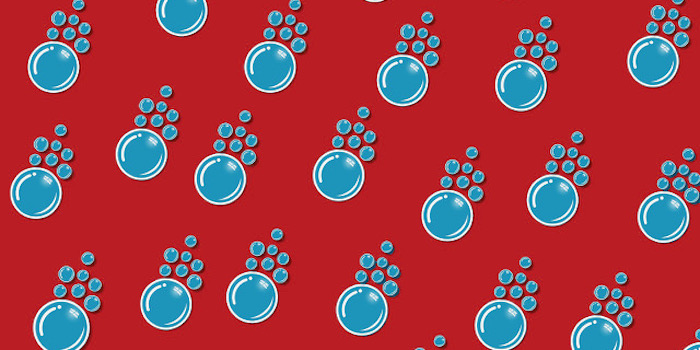 In the past I have blogged on this site about my vehement opposition to the extraordinarily high blood flow rates so often recommended by (and practiced in) US dialysis services. In the following referenced past blogs – and in several others – I have focused on: 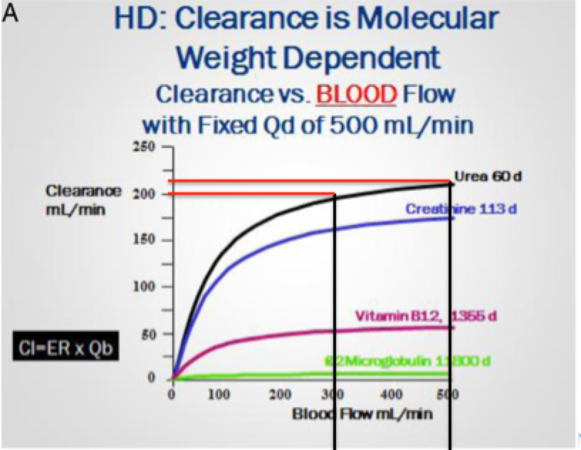 Both [1] and [2] canvas vitally important concepts in the practice of good, thoughtful, and protective access management. Both [1] and [2] speak loudly against thoughtless and ill-advised ramping of pump speed to achieve blood flows in excess of (my arbitrary maximum of) 350 ml/min. And—especially [2]—demonstrates the ever-diminishing returns to clearance from an ever-increasing pump speed; i.e. the law of diminishing returns. But, as the late-night TV ad-man so often says, “but wait – there’s more!”

Micro-bubbles are just what they sound like: small, almost microscopic air bubbles that can—and do—form at several key sites within the extracorporeal circulation of a dialysis system.

A much-admired friend, André Stragier, a life-time dialysis technician from Belgium, now retired, but still a true sage of our profession, recently read Henning Söndergaard’s August 15, 2019 post, We Need a Revolution in Dialysis Treatment. Upon reading Henning’s impassioned plea, André was prompted to email me and remind me of (1) the importance of micro-bubble formation (MBF), and (2) the easy potential to revolutionize patient “risk” by ensuring a reduction in—or abolition of—MBF.

It appears that MBF relates directly to all of the blood flow issues I have previously discussed. Putatively, at least, there are three primary risk foci for MBF:

I will quote, and at times paraphrase, part of André’s email to me:

“...more than 20 published papers reference the harmful effects of microbubbles in hemodialysis patients.

In summary: microbubbles enter undetected into the patients via the venous bloodline and lodge in various sites, but mainly in the lungs. These microbubbles obstruct blood flow when they lodge in the capillary circulation, and cause tissue ischemia and an inflammatory response through complement activation.

Aggregation of platelets and clot formation then occurs, leading to microcirculatory and tissue damage.

We should therefore—ASAP—seek to design systems that provide microbubble-free dialysis.”

This was André’s immediate sense of a “revolution;” one that would be so easy to implement, if only manufacturers would put their hearts and minds to work. While the full text of Andre’s attachment is provided as an addendum at the end of this post—with his permission—and all should take the few minutes required to read it, I will summarise the three main sites of microbubble formation he describes in his addendum:

A luer-lock connects the arterial needle to the arterial line of the dialysis line set. While this junction seems outwardly sealed and secure, the dialysis machine creates a negative pressure inside the blood tubing as it sucks blood from the fistula towards the dialyser.

Solution: Devise an Air-seal for Both Luer Connections

Using simple silastic or gel technology, low-cost snap-caps (or similar) could be designed to externally seal and protect the negatively pressurized blood compartment from any externally-entering air. Even more basic might be to seal the luer-connection with impervious tape, like a small sliver of duct-tape (or similar). Simple solutions, yes—but yet to be considered.

When the bloodstream enters the bubble trap, it carries along with it a small amount of the air present in the chamber top. This “carried” air is pulled downwards with the stream of blood entering from the top. As the upward “lifting force” of the microbubbles is less than the downward “driving force” of the stream of blood, small microbubbles travel lower into the bubble trap chamber.

This effect is magnified either by a low blood level in the venous chamber or by a high blood flow—or worse, both—and at high pump speeds, microbubbles are inevitably pushed through the bubble trap and into the venous return line.

Again, this is driven, I part, by that bête-noir word of any dialysis system: turbulence!

André’s team in Belgium solved this by redesigning the blood inlet in the venous chamber to position the return conduit 2 cm lower than usual, with the blood level 1 cm higher than the inlet. The cost of their redesigned lines was identical to that of the standard blood lines. 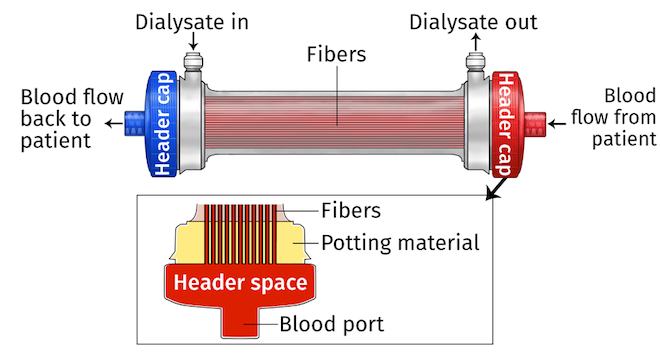 During dialyser priming, all of the hollow fibres of the dialyser should simultaneously and equally fill with priming saline. In practice, this doesn’t always work as well as it should. As priming saline takes the path of least resistance through the central fibres of the dialyser, some of the lateral fibres may retain air and contribute to microbubble formation, especially at the treatment start.

Solution: Add a Back-filter Phase to the Priming Process

Once the dialyser is thought to be adequately “primed,” add a 200-300 ml phase of back filtration (as per HDF) during which the positive pressure and flux will be identical for all fibres. This will remove any residual air. This step would demand ultra-pure dialysis fluid, but as ultra-pure dialysate should be part of all good dialysis, this should not present an insurmountable problem.

It should be of interest that an invited editorial in the International Journal of Artificial Organs, Matsuda K, Fissell R, Ash S, and Stegmayr B. “Long-Term Survival for Hemodialysis Patients Differ in Japan vs Europe and the USA. What Might the Reasons Be? doi: 10.1111/aor.13363. Epub 2018 Nov.11 has suggested just this: high blood flow rates are unavoidably associated with more microbubbles!

In summary, while it seems certain that MBF matters, we have far too little information on just how much microbubbles matter, or how much we should be worried about them. But, as they can be prevented—or minimised—by simple steps, should we not try to find out more of their consequences?

What does seem certain is that faster blood flow rates lead to greater micro-bubbling! So, as I cannot think that microbubbles in the return circulation are good for patients, I can (and will) add the risk of microbubbles to my crusade for gentler, softer, kinder dialysis…gentler, softer, and kinder to the fistula, and gentler, softer, and kinder to the patient. As Henning Söndergaard said in his August 15th post...we need a revolution in dialysis therapy, and this might just be one of the important battles to wage.

Different authors (1,2) reported on the chronic presence of micro-air bubbles in the blood circuit of dialysis patients; they pass undetected through the bubble catcher air detector of the venous line (3,4). The clinical damaging consequences were clearly described (5,6,7 8): Micro air bubbles impede the blood circulation mainly in the lung capillaries: this causes tissue ischemia followed by inflammation and complement activation. There is an urgent need to solve this problem but so far only one dialysis company took measures that solved this problem partially (9).

There are three micro air bubble pollution sources to tackle:

Wagner et al. (1) measured in the arterial line 2 micro air bubbles per min. upstream of the luer-lock connector compared to 46 downstream from it; the higher the negative arterial pressure, the more microbubbles are reported.

In practice, when technicians connect two gas pipes they always use a seal, avoiding any leakage. However, in dialysis, the two connecting parts of the luer-lock connection are of hard plastic without seal. Their air tightness relies on the contact surface smoothness and the pressure with which the male part of the connector is pushed into the female one, and in practice, this screwing force varies between nurses and also for the same nurse from day to day. Incidentally, upon disconnection, the luer-lock can be stuck, needing two clamps to unscrew. When a central vein catheter us used, this can be damaging, necessitating catheter replacement.

One must realise that the viscosity difference between blood and air is huge: 4 versus 0.018 centipoise, respectively (10). This is why there is no blood leakage at the venous luer-lock connector (positive pressure) whereas at the arterial luer-lock side, a variable amount of micro-air bubbles are sucked into the bloodstream (negative pressure). This problem exists since more than 50 years but was only recently discovered (1).

This mechanical error needs to be urgently corrected! The solution is simple: add a mini-seal to the arterial luer-lock connector. This can for example be done by adding a mini film of slightly flexible Teflon or PTFE on the outside wall of the male connector, acting as a seal upon insertion into the female connector. This should also avoid the luer-lock being stuck upon disconnection. There is some small R&D work to find the best solution, suitable for automatic production. The effect of this improvement must of course be evaluated. The final goal is to obtain a completely air bubble free extracorporeal circuit. The problem of the arterial luer-lock leakage must absolutely be solved as this is most likely the most important problem of the three discussed in this text.

When the blood stream falls in the bubble catcher, it takes with it a minor part of air present in the chamber top: a very small fraction of it is conducted with the stream because the lifting force of micro bubbles is lower than the driving force of the blood stream. This was repeatedly registered and the results revealed that this problem is the worst with a low level in the venous chamber or with a high blood flow (1, 12, 13). By opportunity, in 1995, we solved this problem and applied this solution in our unit in the UCL. First, we did so in our CVVH patients in the ICU to reduce the coagulation of the venous bubble catcher, thus reducing the frequency of the necessity to replace the whole circuit. 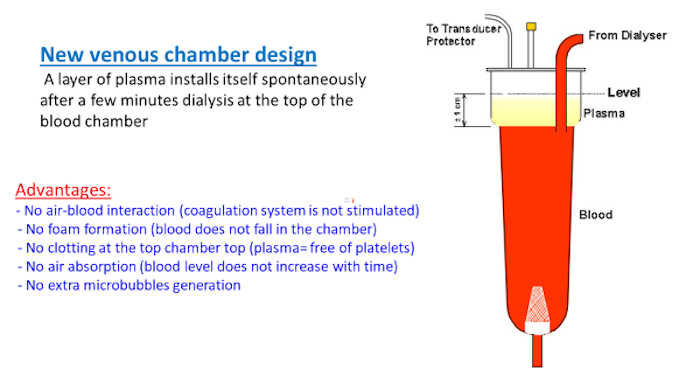 After this positive experience, this principle was extended to maintenance dialysis patients. We illustrate the way how this succeeded: the blood inlet in the venous chamber is positioned 2 cm lower than usually with the blood level 1 cm higher than the inlet. This offers several advantages, cited at the left hand side of the illustration. The cost of these lines was identical to that of the standard blood lines (gently offered by a small competing company!).

The problem of the dialyser capillaries is that they are in parallel position. In theory, all capillaries should be simultaneously and equally filled (principle of communicating vessels) during the slow priming with the venous outlet upside. But, in practice, this seems not to work perfectly, although it is not clear why. As soon as the capillaries are filled, the saline takes the pathway of the lowest resistance, i.e. through the central fibers, while in some other fibers air bubbles still remain; later on, in the beginning of the dialysis, they leave and become part of the air micro bubble problem. This can explain why more micro bubbles were measured at the beginning of dialysis compared to later and that wet stored dialysers entail less micro bubbles. (1,14). However, it is possible to resolve this problem during priming; as soon as the chambers are filled, we can include a phase of back filtration, some 200-300 ml: the positive pressure and the flux is identical for each capillary and, in this way, we can remove the residual air out of all capillaries. Therefore, one must dispose of ultra-pure dialysate, which in anyway is the preferred option, as it has the potential to decrease inflammation (14).

What are the advantages of microbubble and blood with air-contact free dialysis?