How Come the English Never Learned to Cook? The Scots Did!

This blog post was co-authored by Henning Sondergaard and David Rosenbloom on July 23, 2020. 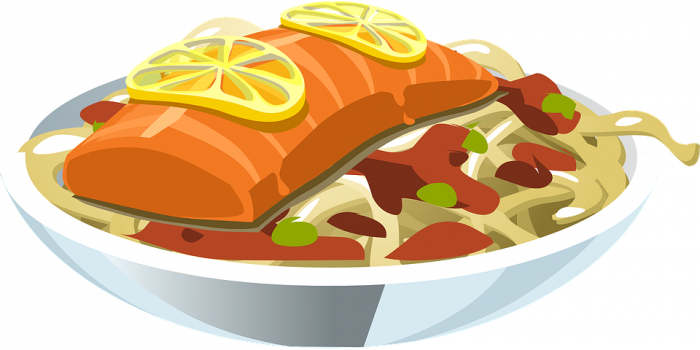 Authors' note: This is the 3rd of a series of blogs about our adventures traveling in Europe together in 2019. They will appear here on the fourth Thursday every month, and will eventually be compiled into a book entitled: Taking Chances, or How to See the World Living with Chronic Illness.

I flew from Copenhagen to Aberdeen Airport. True to form, the airline was reluctant for me to bring my dialysis machine. This time it was the weight that they felt was a problem. They argued they couldn’t allow any items heavier than 36 kg and with its flight case it weighs 45 kg. So, I asked them “What if I had brought an electric wheelchair weighing more than 36 kg?” I could see the panic build in the eyes of the lady behind the counter who had been left behind by her colleague to deal with me by herself. So, I continued, “This is an assistive device, just like my wheelchair.” Apparently, that pushed her over the edge. “I’ll get a hold of my manager. Just a second.” I replied calmly. “I have plenty of time,” adding, “I am used to this.” When the manager arrived I repeated my argument about the machine being an assistive device just like an electric wheelchair. That immediately led to her allowing it onboard, no questions asked.

To my American friends I want to add that you guys have an excellent DOT document Home Dialyzors United helped create that you can download from their website here. It works for all flights where at least one leg of the trip involves the United States.

At Aberdeen Airport, David and Linda were waiting for me as soon as I wheeled out with a helpful assistant, who was very curious about all the things I was packing. David had secured a vehicle large enough to carry three adults with their luggage and all my medical equipment, supplies and wheelchair. The trip as we planned it would not have been possible without this shiny black transport.

We drove to our first destination, Inverurie, a sleepy town of 10,000 northwest of Aberdeen in eastern Scotland. Our hotel, the Strathburn Hotel, was a nice family run affair, just as I imagined British hotels should be. 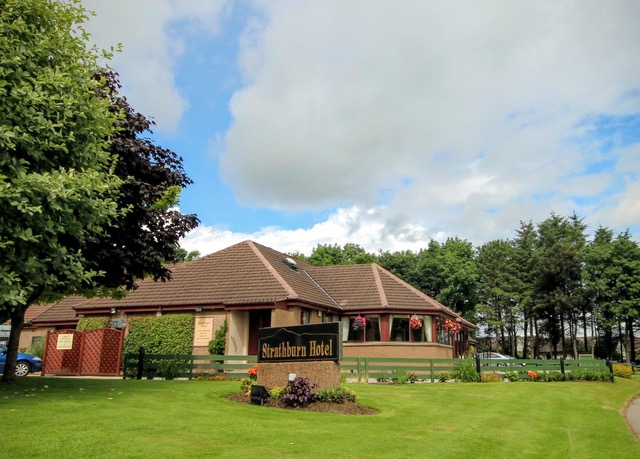 Arriving at the hotel, I was a little concerned how we were going to get my dialysis machine inside. There were stairs as well as a ramp getting into it, but the weight and size of the box it travels in would make it nearly impossible for any of us to move it ourselves. Fortunately, the porter was one of the stars of the local high school rugby team — which was no surprise when looking at his size. He easily lifted the box up to chest height and carried it down the long corridor to my room. No problem at all.

I had been a little anxious about the food. For many years I have joked about how the British invented ethnic food because their own cuisine was not worth eating. David and I had talked about it on the phone and he had told me not to worry. He had been to Scotland before. Unlike the English, the Scots knew how to cook, he said.

I was far from convinced. I had horrible memories of English food from my youth when I was deeply involved in wheelchair sports. For a number of years, I traveled to the famous Stoke Mandeville Games outside of the town of Aylesbury between London and Oxford. It was a sort of Olympic-type games for people with spinal cord injuries who gathered from all over the world. The games take place every year except the years of the summer Olympics and Paralympics. In fact, it is considered the forerunner of the Paralympics that now includes many more types of disability while Stoke Mandeville is still only for people in wheelchairs.

At Stoke Mandeville the food was notoriously bad in that typical English way. I still remember with horror the first year I was there. After having played an intense international basketball game that we lost horribly, I came down to the food hall, starving. “Lunch” that day consisted of 3 pieces of salami per person that had been put out into the window so it could sweat and buckle nicely, peas scooped up directly from one gallon tins in the back, as well as white bread that looked like it had carefully been stripped of all nutritional value. For years, I was certain I knew where Monty Python had found the inspiration for their “Spam, Spam, Spam, and Spam” sketch: the food hall at Stoke Mandeville. Fortunately there were beer tents with snack food to eat during the day and in the evening we could either go to a local pub, where the food was slightly better, or take a taxi into the local town of Aylesbury and eat at an ethnic restaurant of which there were plenty.

It was with a modicum of trepidation I went from my room to the restaurant at the Strathburn Hotel. At first glance, I couldn’t see David and Linda. I figured they were bound to be there since I had taken much longer than anticipated to clean up and change after my flight. I went all the way to the back of the restaurant and back to the entry. I must have been fairly tired from my trip. Coming from the other end they were sitting in plain sight, but for some reason I had missed a whole section of the restaurant. They were conveniently placed so I didn’t have to disturb any other diners to take my seat at a table by a large window. 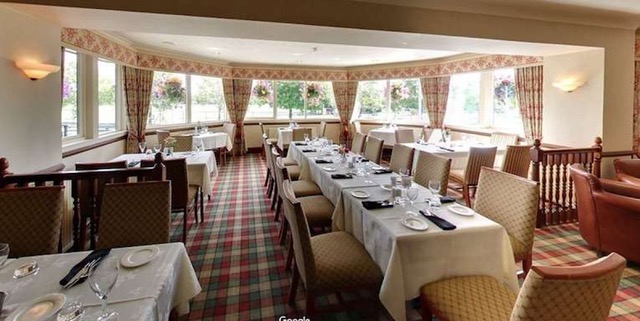 The dining room at the Strathburn in Inverurie, Scotland.

I reluctantly had to admit David was right. The Strathburn Hotel had a fabulous restaurant, despite being a small hotel with only 27 rooms. The dining room was chock full upon my entry. At first it puzzled me. Where did all the people come from? But I soon realized the restaurant is a popular dining spot for the locals. The food was excellent and there was plenty of it. I ordered pork filet with vegetables. It was absolutely delicious. David and Linda went for two different fish dishes, both of which looked really good. I couldn’t help ordering a glass of the local single malt, Glen Garioch, before dinner, thinking “when in Scotland, do as the Scots,” and I wasn’t disappointed. Glen Garioch was a good dram. (By the way, it's pronounced "Glen Geerie" according to the locals.)

The Strathburn Hotel, the dinner, the setting was delightful. What a nice introduction to Scotland. The atmosphere was laid back and accommodating. People were helpful and easy to be around. This was going to be a good trip, I could feel it. 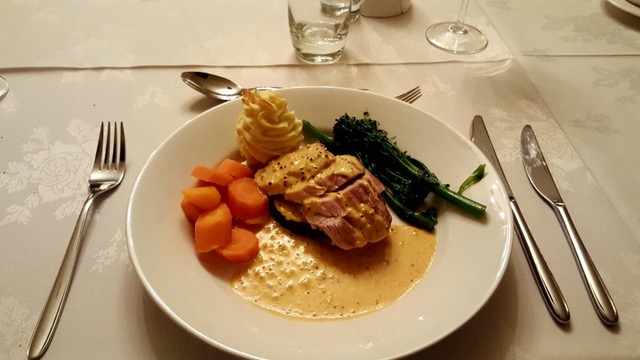 Pork medallions at the Strathburn.

On our Scotland trip, as well as in Denmark, Henning, Linda and I shared countless meals, a wee dram of single malt scotch from time to time and endless conversation. It was great to be able to talk in person, especially when there was fresh sea bass or salmon to be had. My usual means of communication with Henning is Skype, but it can’t replace sitting across the table from him.

Like Henning, it was a delight for Linda and me to discover fine food in Scotland after spending days eating indifferent meals in England. In London, on past trips, we mostly headed toward ethnic restaurants, like Italian or Indian. Although top English chefs do exist in the finer restaurants, their fare is usually beyond most people's travel budgets. But out in the countryside or smaller cities, your choices are very limited—fried fish, overcooked ham, bland lamb stew with boiled potatoes or tomatoes and yes, the mounds of tasteless canned peas. The English for the most part still haven't heard of fresh salad greens or roasted vegetables.

I will, however, give them high marks when it comes to baking and desserts. There, they excel. The smell and taste of hot, oven-fresh biscuits on a cold, windy day at the restaurant next to the Portland Bill Lighthouse on the English Channel was unbeatable. And the fresh scones with preserves and hot tea made an ideal light breakfast, particularly when the English standby of bangers and mash (pork sausage and potatoes) three days in a row just did not appeal.

We began this trip two weeks earlier in West Dorset, in the famous port town of Lyme Regis. Fans of Jane Austen will remember it as the setting for part of her novel Persuasion. It's a very old town on the famed Jurassic Coast and known for the stone harbor wall called The Cobb, and very popular with summertime vacationers from London and the north. 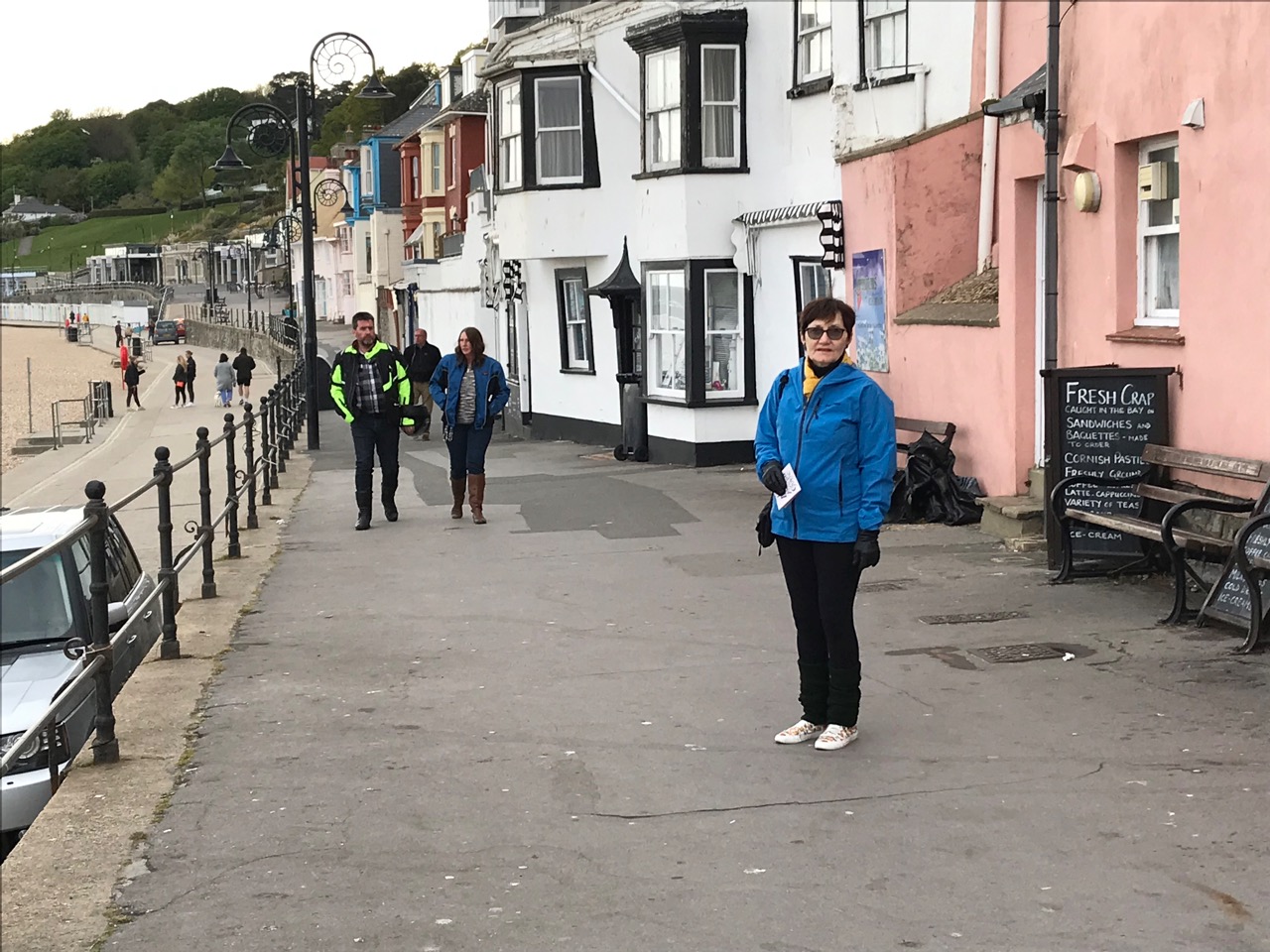 Linda on the way to The Cobb in Lyme Regis, England.

Dorset has also recently become known for its locavore, or fresh, locally grown food. Much of the food is raised on local farms, not unlike the dishes and menus we know as California Cuisine. Our hosts at our B&B in Lyme Regis, are a younger couple. The wife is a caterer. She highly recommended one particular restaurant on The Cobb called the The Anchor. She warned us, that the front room of the restaurant was a rather seedy bar serving fish and chips, but if we went to the rear, we would find another world entirely—a beautiful and tastefully decorated dining room that served the most wonderful fresh fish dishes with local side dishes. It was a bit pricey, but worth every bite. Needless to say, we went there two nights in a row, breaking our longstanding rule about going back to the same restaurant on successive days.

In Ardersier, in the Scottish Highlands, stories of which Henning will regale you in a future blog, we stayed at a B&B with a small lovely restaurant that served good English food. Or stated otherwise, traditional food made well. They had a delightful young staff, including a very friendly and accommodating male chef.

The kidney diet can be very restrictive, depending on the mode and frequency of dialysis. Henning does nocturnal or frequent long-session dialysis at home or when traveling, so his diet is less restrictive. But if you are doing normal in-center dialysis, it’s best to avoid commercial, fast-food restaurants in favor of places like we visited in Scotland. Independent restaurants are usually more accommodating and will substitute ingredients or provide alternative foods for folks on special diets. Don’t be bashful. Just ask. It doesn’t cost anything more.

One night, I felt like a simple but tasty plate of pasta in a butter sauce with herbs and grated cheese. I asked the chef if he could make it for me. Without hesitation he whipped it up in no time, and as he served me, he said, "I often make this for myself. I tried putting it on the dinner menu, but the locals wouldn't eat it. They are not very adventuresome about food." 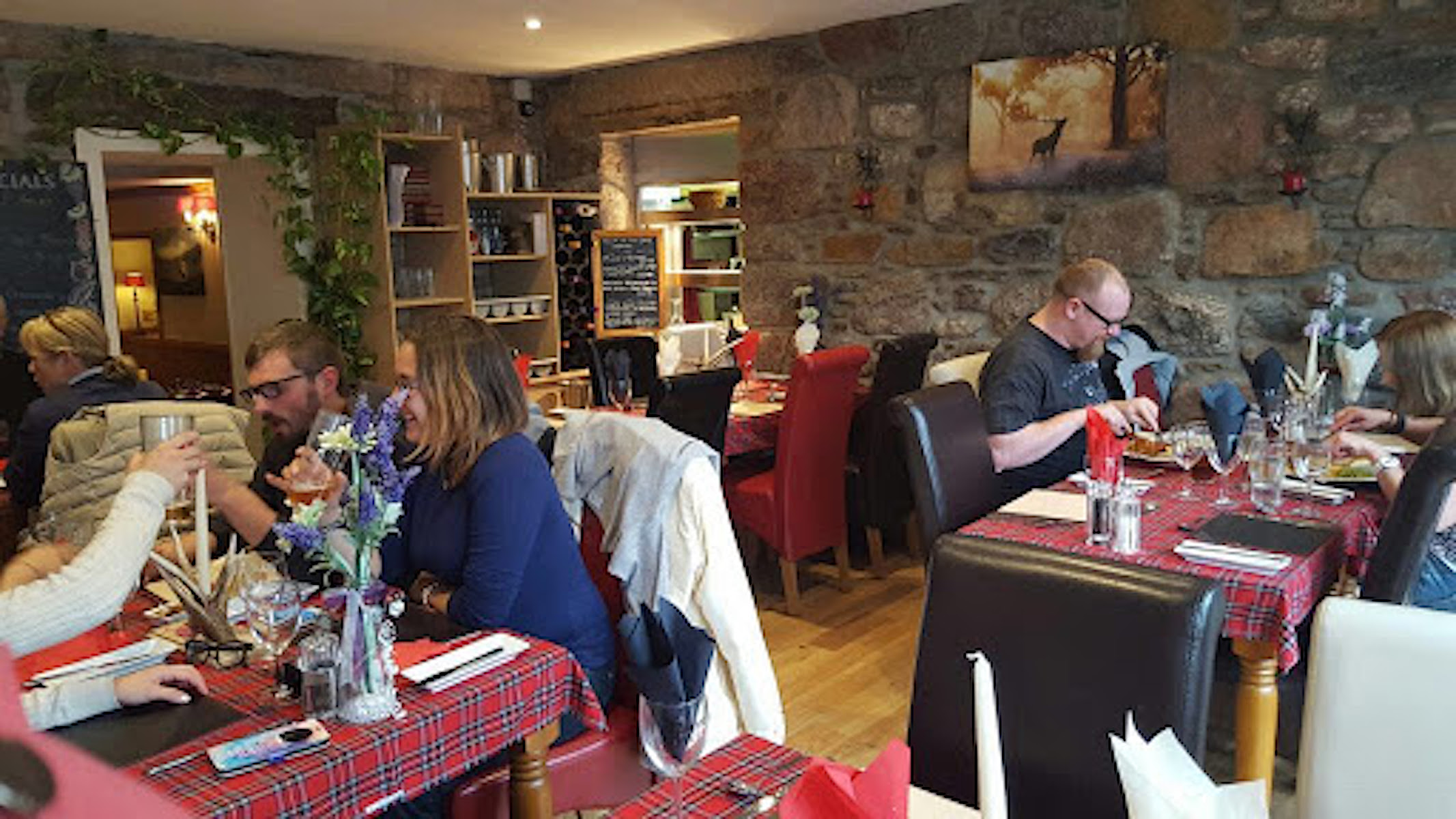 The dining room at our B&B in Ardersier, the Star Inn.

That was great insight into why the English continue to eat the same foods decade after decade.