This blog post was co-authored by Henning Sondergaard and David Rosenbloom on August 27, 2020. 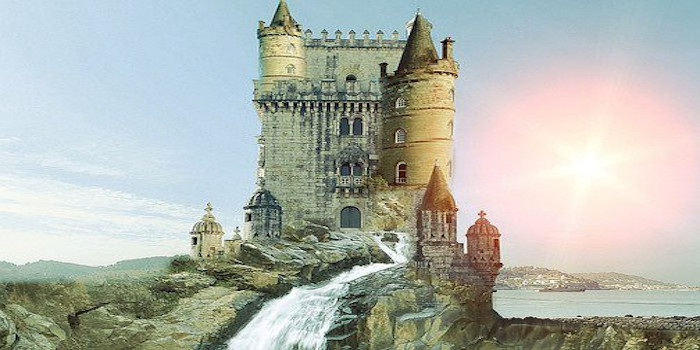 Authors' note:This is the 4th of a series of blogs about our adventures traveling in Europe together in 2019. They will appear here on the fourth Thursday every month, and will eventually be compiled into a book entitled:Taking Chances, or How to See the World Living with Chronic Illness.

Our Scottish vacation sounds ideal, until you consider that Henning is confined to a wheelchair and travels with a portable hemodialysis machine. But what Henning does have is moxie, enough for several people; coupled with a brilliant mind, an inquisitive nature, a side-splitting sense of humor, and an attitude that says "why not?" instead of "why?"

It never once occurred to me that traveling with him would be difficult. After all, I'm acquainted with several people with whom I would never travel, and they aren't on dialysis or in a wheelchair. Henning is so positive and highly motivated that I never doubted we could overcome any logistical problems the trip would put before us.

On our first day in Aberdeenshire, Henning wanted to visit a castle. I had several on our itinerary, but thought that Castle Fraser near our hotel in Inverurie would be a good choice. It looked fantastical—turrets and all, and very old and haunted.

Castle Fraser is old—medieval, in fact—the first part of it built in the 1450s. Not only does it look the part, it also has the stories to go with being so old and legendary, like ancient family portraits, secret staircases, trap doors and other fun things.

Upon arriving, we discovered the access was not as described. Castle Fraser was originally built as an imposing defensive stone tower that was greatly expanded into a country estate in the 17th Century. Castles were built initially for defense and not comfort. Today, after centuries of renovation and beautification, castles are still hard to heat, and, even on a warm day, can feel like a refrigerator. 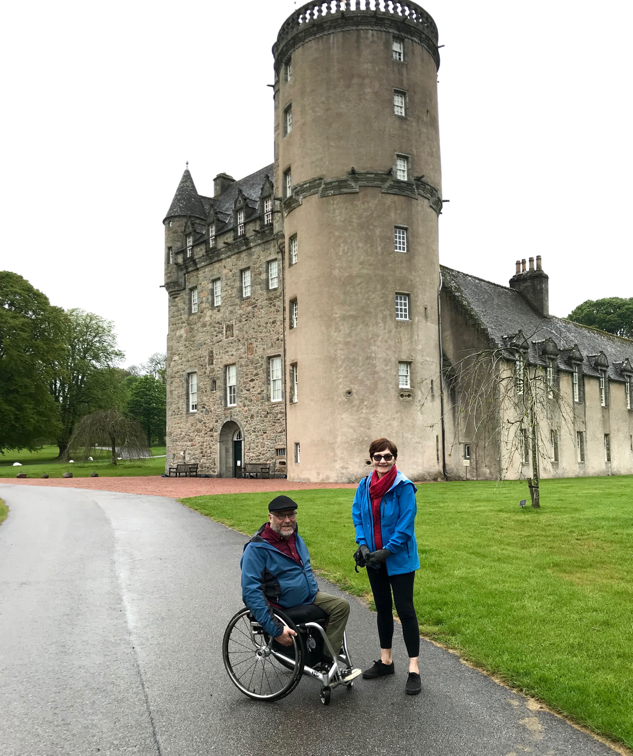 Henning and Linda waiting for docent to open door at rear of castle for Henning to wheel through.

I could enter the castle at ground level, but then was essentially limited to the dank entry hall, a room about 100 feet square. The unflappable Scottish docent at the castle, showed me a semi-circular flight of ten stone steps, and said, "If you can get yourself up those steps, we can get you into the spacious and elegant ballroom."

With that, I slid out of my chair, and, in a sitting position, eased myself up the stone steps one at a time, while the docent carried my wheelchair. The other people on the tour cheered me on.

While the rest of the company continued upstairs with the docent, I had plenty of time to explore the hall and the adjoining rooms including all the trinkets contained therein. I have experienced that in many places: being left behind or sometimes let into rooms where nobody else comes. And I have learned to consider it a treat to explore things in detail, bringing home memories that others miss because they are busy “taking it all in.” 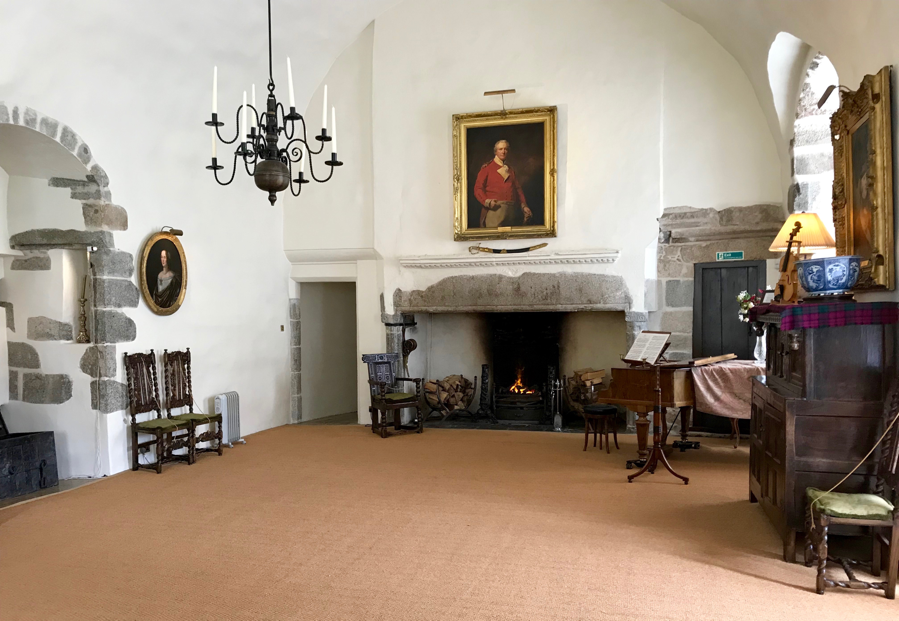 Main hall or great room of the castle where visitors would be initially received. 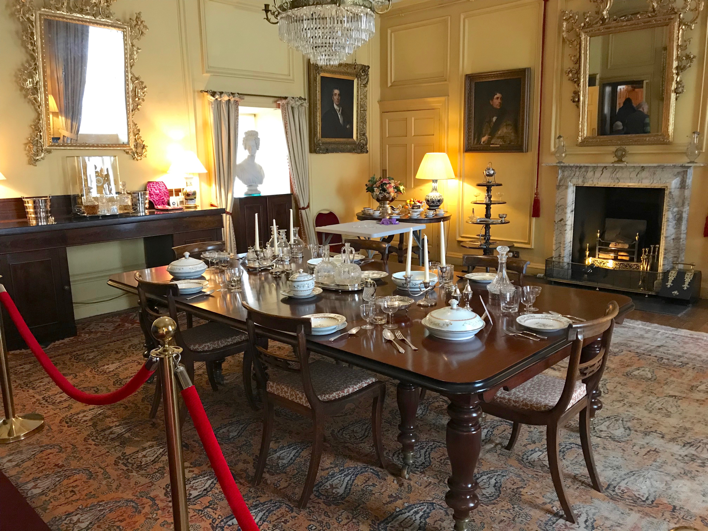 Castle dining room in the style of the 18th Century.

Aside from a closer look at things, I also got an opportunity to chat with the historian, and asked her what it was like having a famous castle for a workplace. She told me it had been a little overwhelming in the beginning, but after a while became commonplace.

Her remark made me think of how that was a rule that I had lived by my whole life. Making the unusual commonplace. When I was a child, it was a huge change to suddenly be in a wheelchair. But after a while, it was my normal mode of locomotion. The only people it seemed to be a problem for were my peers at school, who never quite got used to it. Some of them teased me, while others wanted to go for a ride in it. Of course, a fair number of them did both, depending on what seemed convenient at the moment. The flipside of that was when I started to travel by myself as a teenager. I learned the freedom of being away from home and taking in new things, which also became routine after a while. Not that travel ever got boring, but the butterflies of sitting on an airplane, ready for take-off, don't last that long. 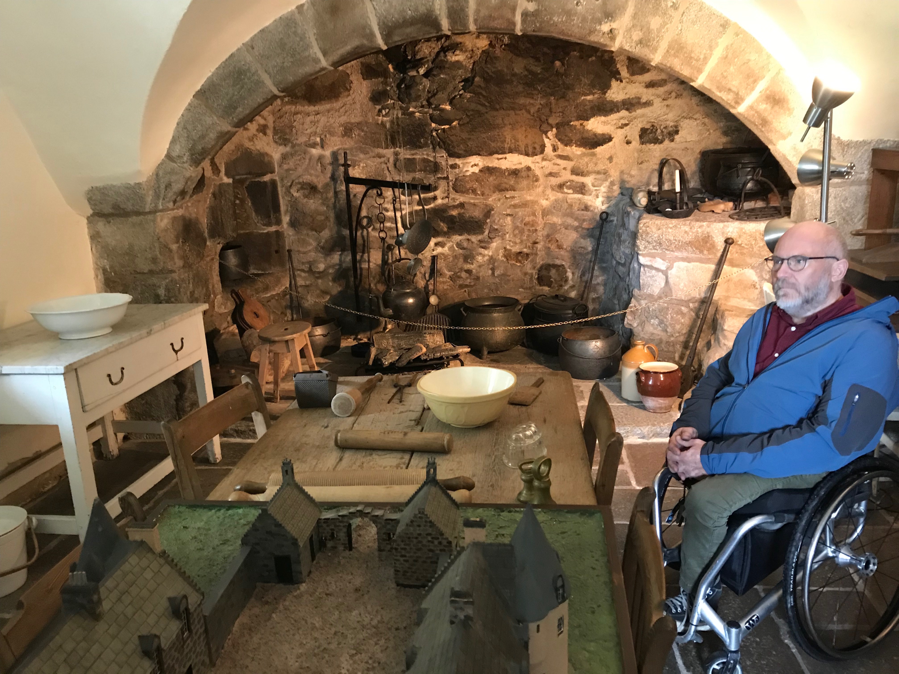 Henning in the Medieval kitchen of the castle keep. He looks right at home.

Negotiating the stairs, as I did at Castle Fraser, was a technique I learned very early on. Having grown up in Copenhagen, with its six story buildings from the turn of the century, I had many friends who lived a few floors up. The only way I could visit them was to get out of my chair and crawl up the stairs. Nobody was going to carry me, or any such foolishness, if I had a say. After I lost my leg, getting up the stairs was far easier than before. So I managed to go see more friends while at the same timekeeping in excellent shape because getting up to the top floor on a hundred year old staircase was not for the weak of body or mind.

My life became my bucket list. If I wanted to do something—no matter how difficult or outrageous—I found a way to do it. I would rather fail miserably at something than not try it because it seemed too difficult. Or, because others thought it was too difficult for me.

While Henning was exploring the lower rooms at Castle Fraser, Linda and I continued on the tour with the guide, who led us up a very narrow circular, stone tower to a series of six landings, each with bedrooms, dens, sitting rooms, etc., which the Fraser family had used for centuries. I scrambled up the uneven stone steps quickly, and eventually found myself standing on a parapet roof looking over the magnificent castle grounds. 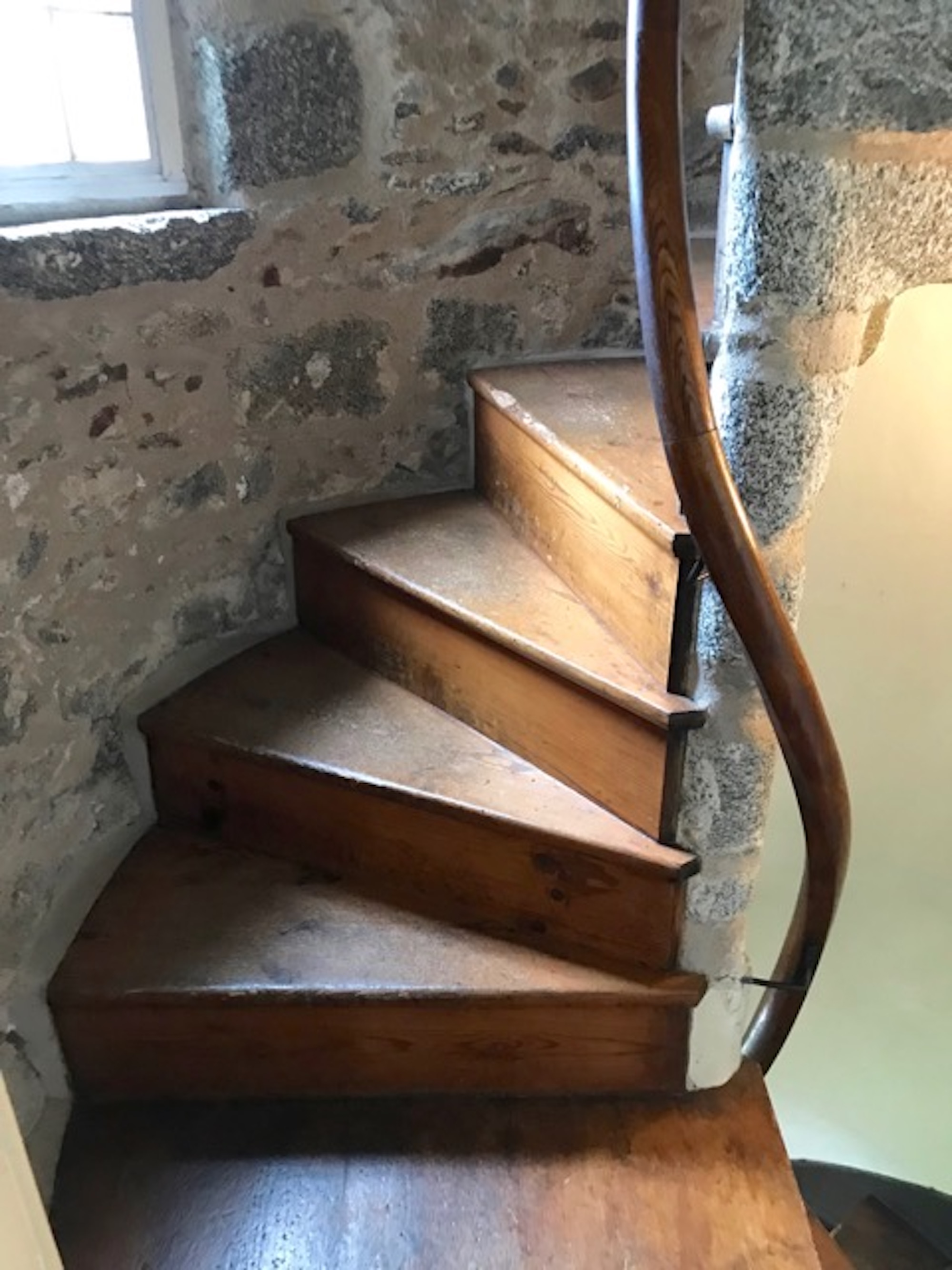 Very narrow, winding staircases in the castle's turrets lead to many beautiful rooms high above the ground level. 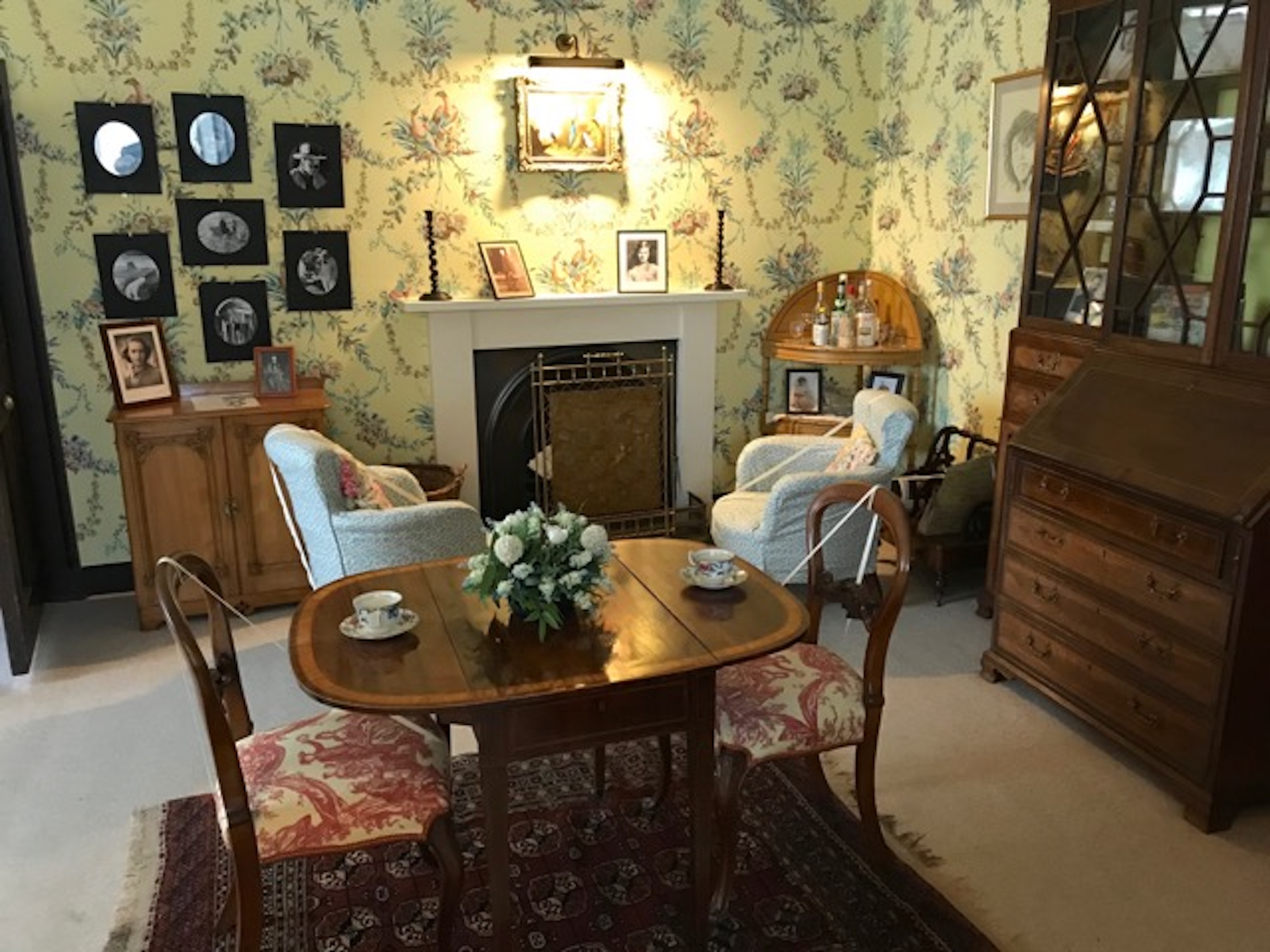 Cozy sitting room off one of the castle turrets. 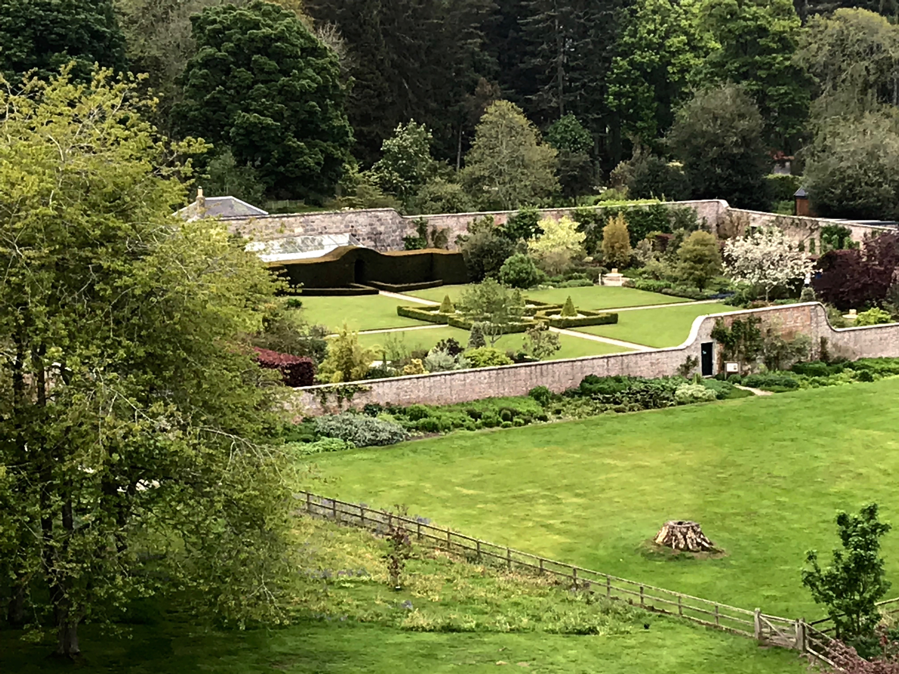 View of the formal gardens at Castle Fraser from the roof of the very highest turret.

It occurred to me, in retrospect, that I could not have done the climb even a few years before. Certainly not with my failed kidneys. It would have been physically too difficult. The transplant was my ticket to travel when and where I wanted—one of the most often mentioned desires of those on dialysis. But, even then, steep uphill hiking was out because of the damage done to my heart during the years on dialysis. The installation of a pacemaker in 2016 allowed me to scale heights with freedom.

A few weeks before we were scheduled to leave for England, I had my first episode of atrial fibrillation (Afib). I had been burning the candle at both ends in preparation for the trip, especially not getting enough sleep. Afib is a scary experience. Those of you who have had it know what I'm talking about. Your heartbeat becomes erratic and you feel like your heart is going to burst from your chest.

Three hours later I wound up in emergency at my local hospital with my cardiologist standing over the gurney and congratulating me. "You corrected your heartbeat by yourself," he said. He changed my blood pressure meds, checked out my pacemaker, and said, "See me in a week."

A week later, in his office, he gave me a thorough exam, rechecked my pacemaker, gave me some emergency meds just in case of another episode, and said, "You're okay to travel. Go to Europe and have a great time."

And go we did. It was a marvelous trip, probably the best we had ever taken. We built in downtime in our itinerary, and split up the long plane rides by staying overnight in Canada on our way to and from Europe. l never needed to check my blood pressure or take additional heart medication at any time on the trip. It was so stress-free, we came back home very relaxed, that we decided to stay in this rather "What me worry?" frame of mind.

And having Henning along for over two weeks on the trip was an added stress reducer. He is so self-assured and relaxed that it has a calming effect on everyone who meets him. We laughed at lot, even when we had our minor mishaps, always cognizant that we all had been given a wonderful gift—the time and means to enjoy each other’s company in beautiful places.