Glasgow: The Tale of the 5-Amp Fuse, and “What's for Dinner?”

This blog post was made by David Rosenbloom on February 25, 2021.

Authors' note:This is the 10th in a series of blogs about our adventures traveling in Europe in 2019. They will appear here on the fourth Thursday every month, and will eventually be compiled into a book entitled: "Taking Chances, or How to See the World Living with Chronic Illness."

When one travels, something always goes wrong. Transportation is delayed or cancelled, luggage goes missing, the rental car you reserved is not available, and so on. When you have a chronic illness or condition, like Henning and myself, snafus can be even more consequential. Health and well-being are at stake.

So, you prepare for many eventualities or you just don't travel very far from home—or not at all. And that is sad, because travel is among the most rewarding activities we can do. It breaks us out of routine, exposes us to new people and places, and above all it adds spice to our lives. And as noted in previous blog posts, Henning and I like a heavy dose of spice in our lives.

Henning's hemodialysis machine is a self-contained, 70 lb. cube that plugs into a regular 220-watt electrical outlet. At home in Denmark, this is no problem since normal household electrical current is 220-watt and electrical outlets in most Western European countries are standard two-prong, round European plugs. However, in the U.K., electrical plugs are a totally different animal—big angular things that contain a fuse. There are no circuit-breaker boxes on the wall like on the Continent or in the U.S. and Canada. So, the dialysis machine required an adaptor to be used in a British outlet.

Henning was beginning a dialysis treatment late one afternoon in his room in our modern hotel in Glasgow, Scotland, when his U.K. plug adaptor blew its fuse. I know something about the English electrical system having been to the U.K. many times over the years.

On our first trip to the U.K. in 1978, Linda and I had naively brought our 110-watt American hairdryer and voltage converter with us. On the first attempt at using it in the North British Station Hotel, then an old, giant of a railroad hotel in Edinburgh well past its prime, we blew the electrics for a whole floor. The next day, we took ourselves to an appliance store and bought a good, European hair dryer made in Germany. We still have it and it works fine.

The appliance store manager asked us what kind of plug we wanted, and screwed on the most common type and then changed the fuse from 1 amp to 5 amps. He said "Those 1 amp fuses are worthless. These 5 ampers will serve you for a long time," and handed me a package of 5 amp fuses. Little did he know that 41 years later they would come in handy.

I carry an array of adapters especially made for England and Scotland, since you can always count on the British to do things differently. So, when I examined Henning's adapter, I discovered it had a 1 amp fuse—insufficient to accommodate the electrical load his machine was drawing.

I excused myself, went back to my hotel room, and came back with a 5 amp fuse. I replaced it in the U.K. plug adaptor and plugged in the dialysis machine, which started immediately. It never again had a problem in Scotland.

Somewhat dumbfounded, Henning said "Where did you get that 5 amp fuse?"

I said I’d had them since our first trip to Scotland. Let's hear it for pack rats!

Knowing when to slow down, rest and eat a nice meal while traveling is very important to anyone living with a chronic illness. Eating well, at a leisurely pace, doesn't have to be expensive or complicated. The kidney diet is difficult enough without cheating on bad pizza, salty hot dogs or other prepared fast foods, or deep-fried items like fish and chips. And no one wants to be awakened at 3:00 AM with painful intestinal cramps or worse. 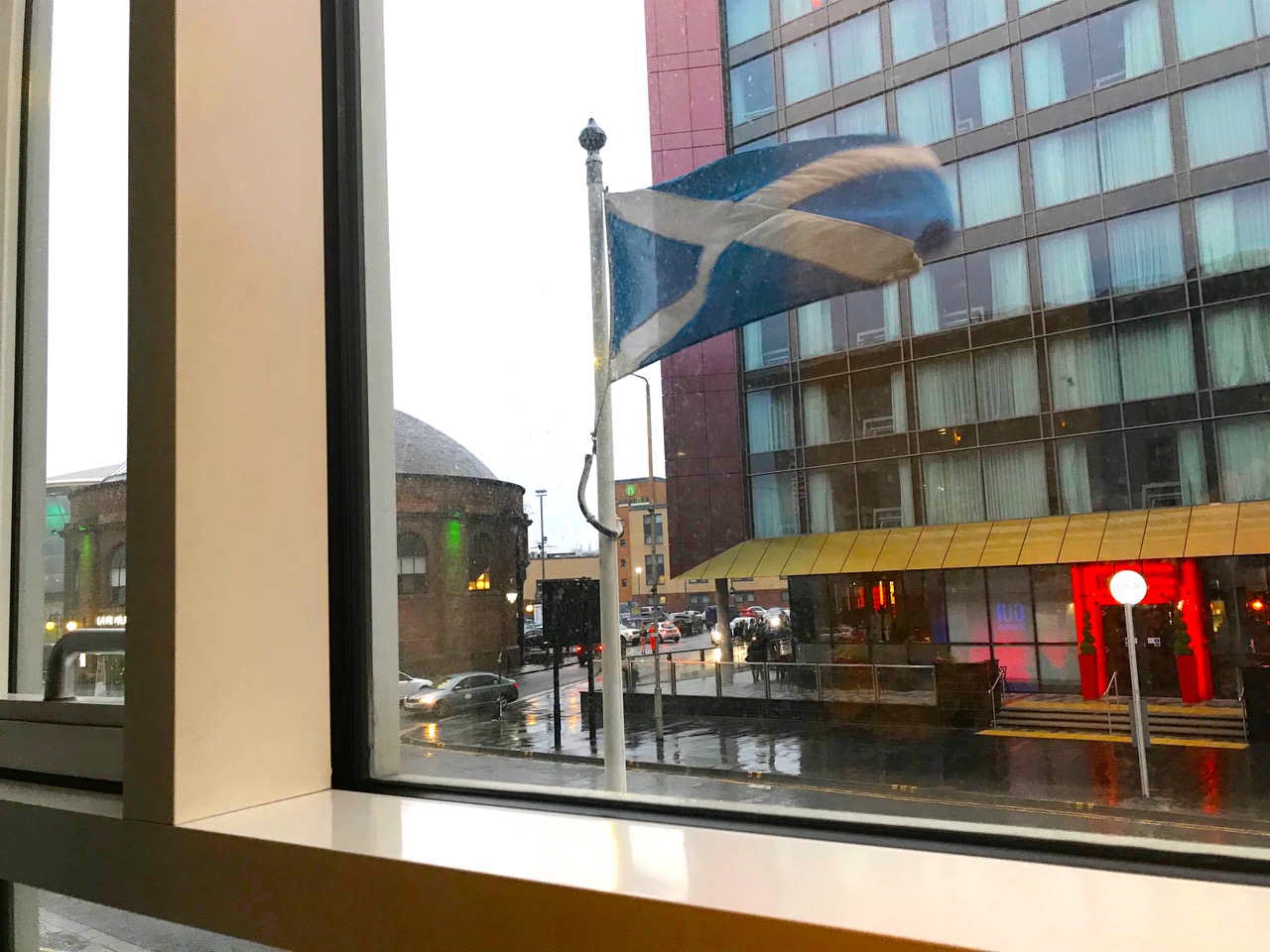 Cold, rainy, windy weather made staying preferable to going out for dinner.

When I was on dialysis, I was never bashful about asking for substitutions or if a dish could be made without salt or other ingredients I could not eat without causing harm. Even today with my transplanted kidney, I'm very careful when I order out. Often old-fashioned family-type diners and better restaurants are more flexible and accommodating. If you don't ask, you can't find out.

Since Henning was doing a long dialysis (he often does 6-8 hour sessions every other day), we decided to get take-out that night. It's always a good alternative and permits relaxing in sweats or bathrobes in one's hotel room. Watching a movie simultaneously adds a special fun quotient to the whole concept.

We were staying at a Hilton right on banks of the River Clyde. Ordering room service was expensive and actually quite limited as to choice. Eating out day after day when traveling can be a drag, as well as pricey. The weather was cold and rainy. The Scottish flag outside our hotel room window was flying straight out in a stiff wind. Take- out was clearly in order.

Across the street from our hotel was an historic, round building called The Harbor Tunnel Rotunda. Built in the 1890s, it conveyed carts and people down into a tunnel crossing under the river. Abandoned in 1926 and shorn of its metal fixtures during WW II, the derelict building had recently been renovated to house several good restaurants. 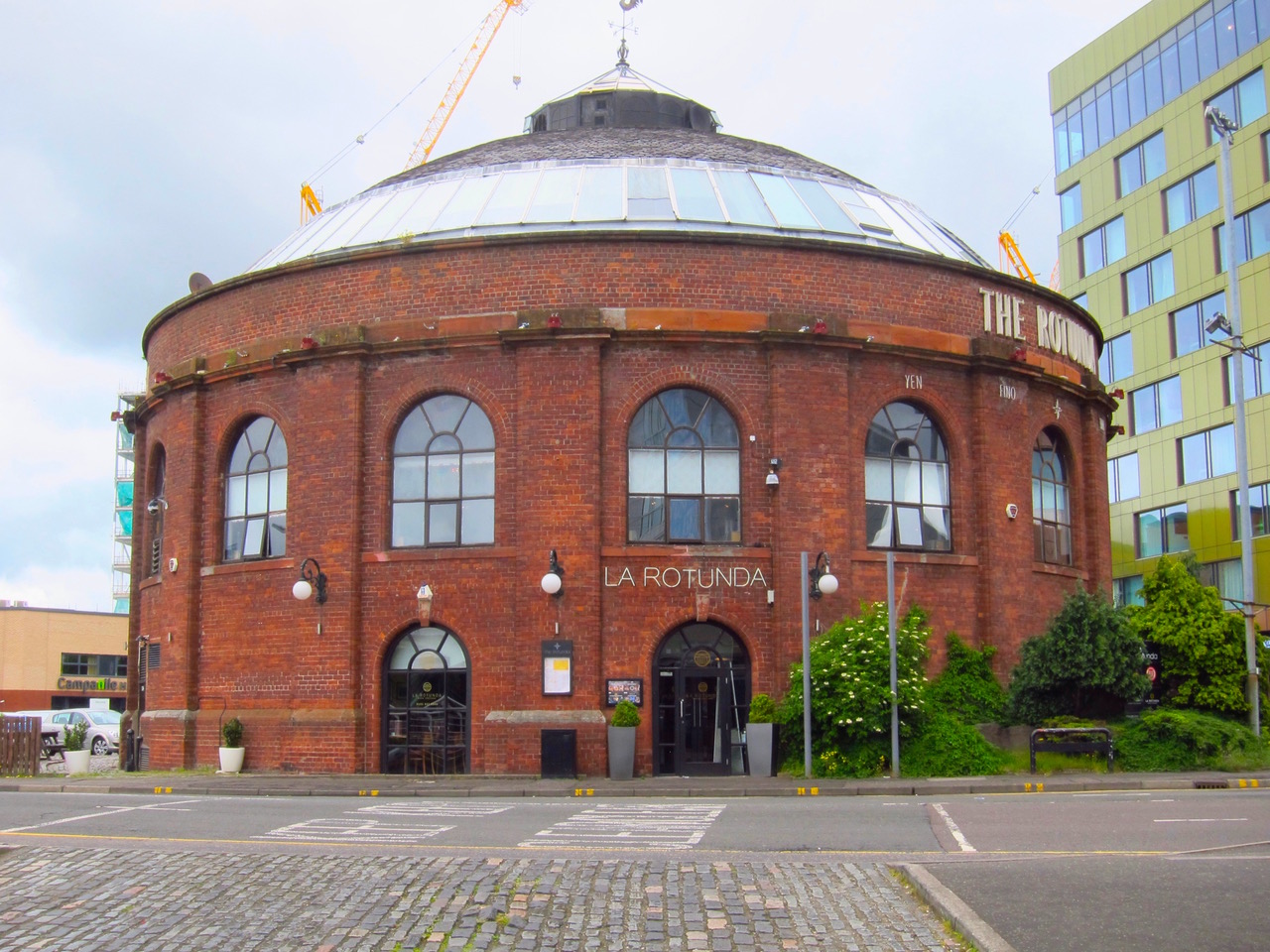 A 19th Century remnant of another age. Built as an elevator to ferry carts, horses, and people to a tunnel under the River Clyde, the Rotunda is now home to three excellent restaurants, all of which provide tasty take-out menus.

So, I put on my rain gear and went to explore the food offerings available in the building's three eateries. My choices were Italian, American (burgers and ribs) and, on the top floor, a Mediterranean restaurant: a gold mine for Greek finger food or mezzes as these appetizers are called. The choice was easy. Greek food is among our favorites.

So I loaded up with hummus, feta, olives, baba ghannouj, tabouleh, and pita bread and took the haul back to Henning's room, where the three of us had a fabulous mini-feast, spread out picnic-style over all available surfaces. We also finished off the to-go single-malt Scotch samples we had been given at Glendronach distillery days before.

Impromptu meals are often the most memorable. And, as I mentioned at the top of this project, leaving time for serendipity when traveling is very important. It isn't a true vacation without surprises, particularly ones with happy endings.