This blog post was co-authored by Henning Sondergaard , David Rosenbloom and Linda Chiavaroli on April 22, 2021.

Authors' note:This is the 12th in a series of blogs about our adventures traveling in Europe in 2019. They will appear here on the fourth Thursday every month, and will eventually be compiled into a book entitled: "Taking Chances, or How to See the World Living with Chronic Illness."

Since we started planning our trip together and David had announced they wanted to spend a few days in Copenhagen with me, I had been looking forward to showing them around my city. Even though I had spent many years abroad, this was my hometown. I was born and grew up in the inner city and moved only seven miles out into the suburbs as a child. I knew the city better than most.

The big question was, what should we see and where and—being big foodies—what should we eat? It turned out those things more or less took care of themselves. The first morning I sent Linda and David to the local bakery that took care of breakfast for the rest of their stay. I decided to change the colloquialism “Kid in a candy store” to “David at a Danish bakery.” 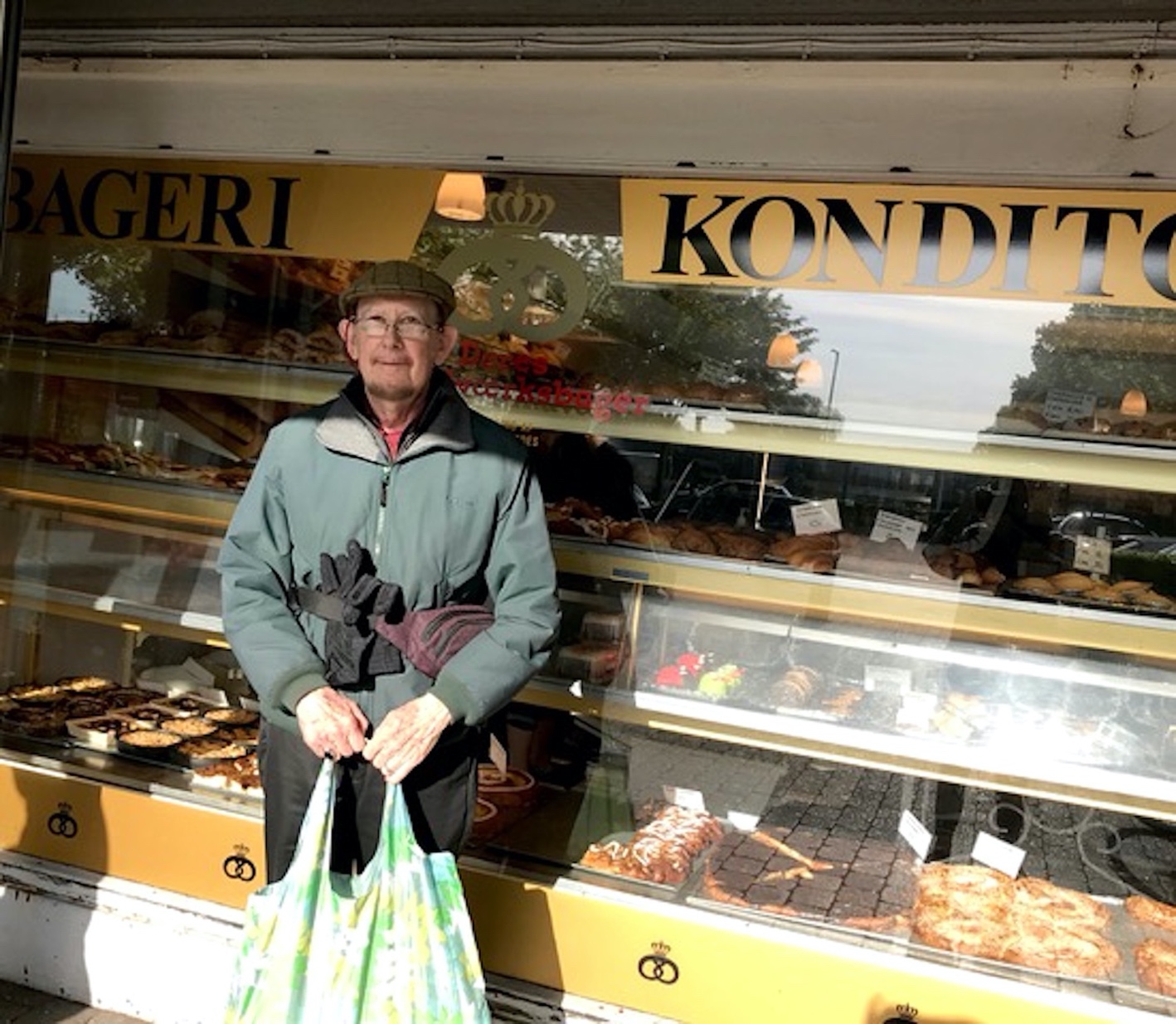 Henning lives in the western suburb of Copenhagen called Rødovre. On our first morning there, he said to get some pastries for breakfast at the bakery a short walk from his apartment. It was early, around 7:30 a.m., and the air was brisk. The thought of warm, fresh-baked pastries accompanied with steaming tea, cheese and cold meats was truly enticing. Danish breakfast has always been my ideal meal. And now I was going to be doing it in Denmark. Comfort food at its ultimate.

As Linda and I walked into the small bakery, which was busy with others who had the same idea, the aroma engulfed us. Shelves full of every imaginable type of pastry filled or topped with fruit, cream, and icing were overwhelming. We stood stupefied with too many choices. The saleslady behind the counter realized we were foreigners, and gently but efficiently guided us in making our selections. It really didn't matter what we chose.

We returned to Henning’s and began our morning breakfast feast—creamy, soft Danish cheeses, spicy ham and gravlax, piping hot tea and seven or eight different kinds of real Danish pastry—with flaky crusts, real fruit fillings with no added sugar, and butter cream centers that melt in your mouth. Calories be damned! I was in heaven.

Later in the day, we had plans to meet dear friends from Vienna, Hans and Helga Cohnen, who were flying into Copenhagen. We had met them many years before when Hans and I worked for the same corporation in the U.S. Over a series of dinners, we got to be very good friends, corresponded often and visited each other in our home in Los Angeles and theirs in Vienna. But it had been many years since we last saw them. Kidney disease and dialysis kept me from going back to Europe. Widely traveled, they had surprisingly never been to Copenhagen and jumped at the chance to see it from a native's (Henning) perspective and catch up with Linda and me. They had just renewed their marriage vows a few weeks before after 50 years together, and were looking forward to celebrating with us at dinner in the Tivoli Gardens. After drinks and schmoozing at their downtown hotel, the five of us headed to Henning's favorite Tivoli restaurant, Grøften. 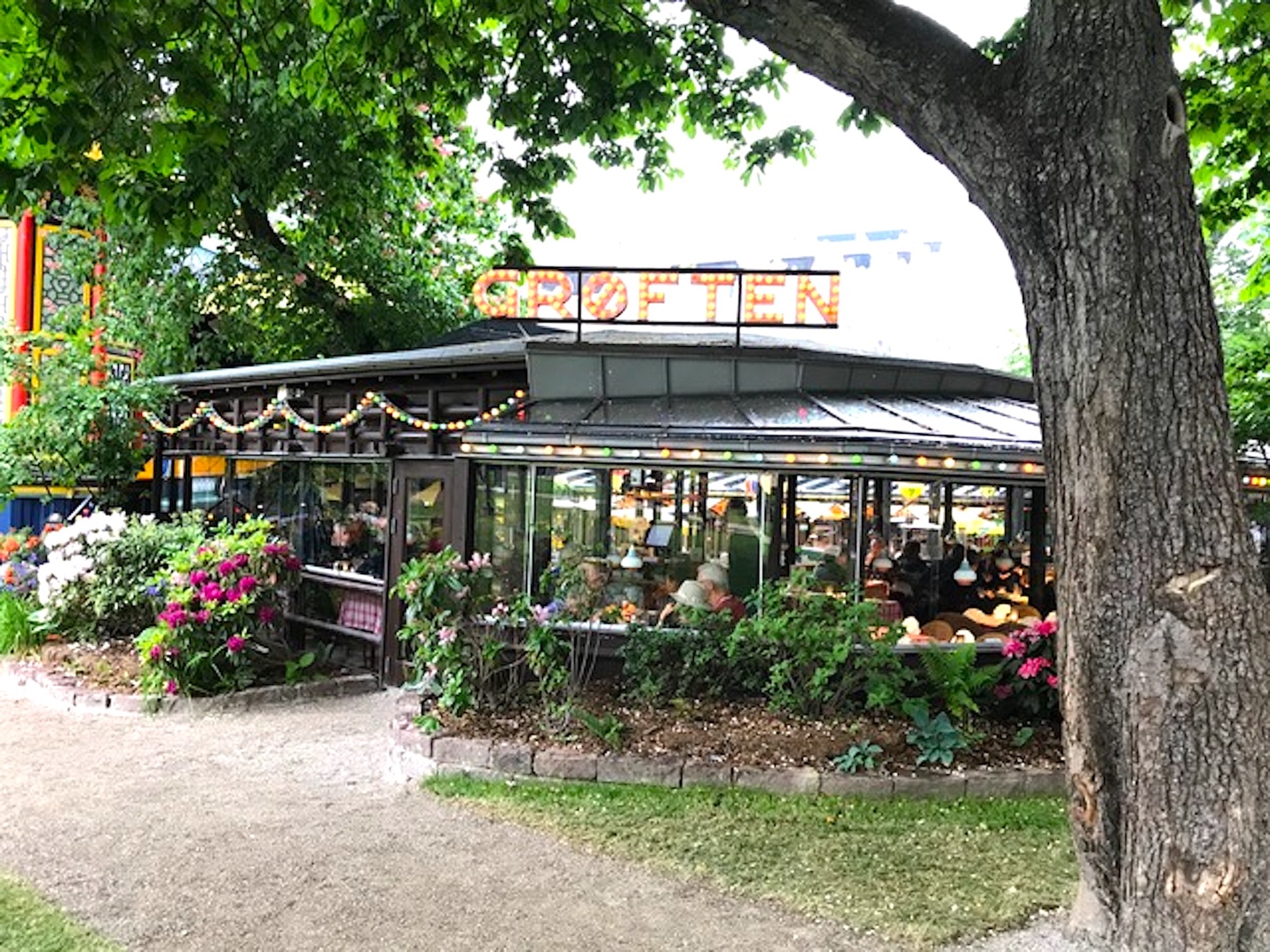 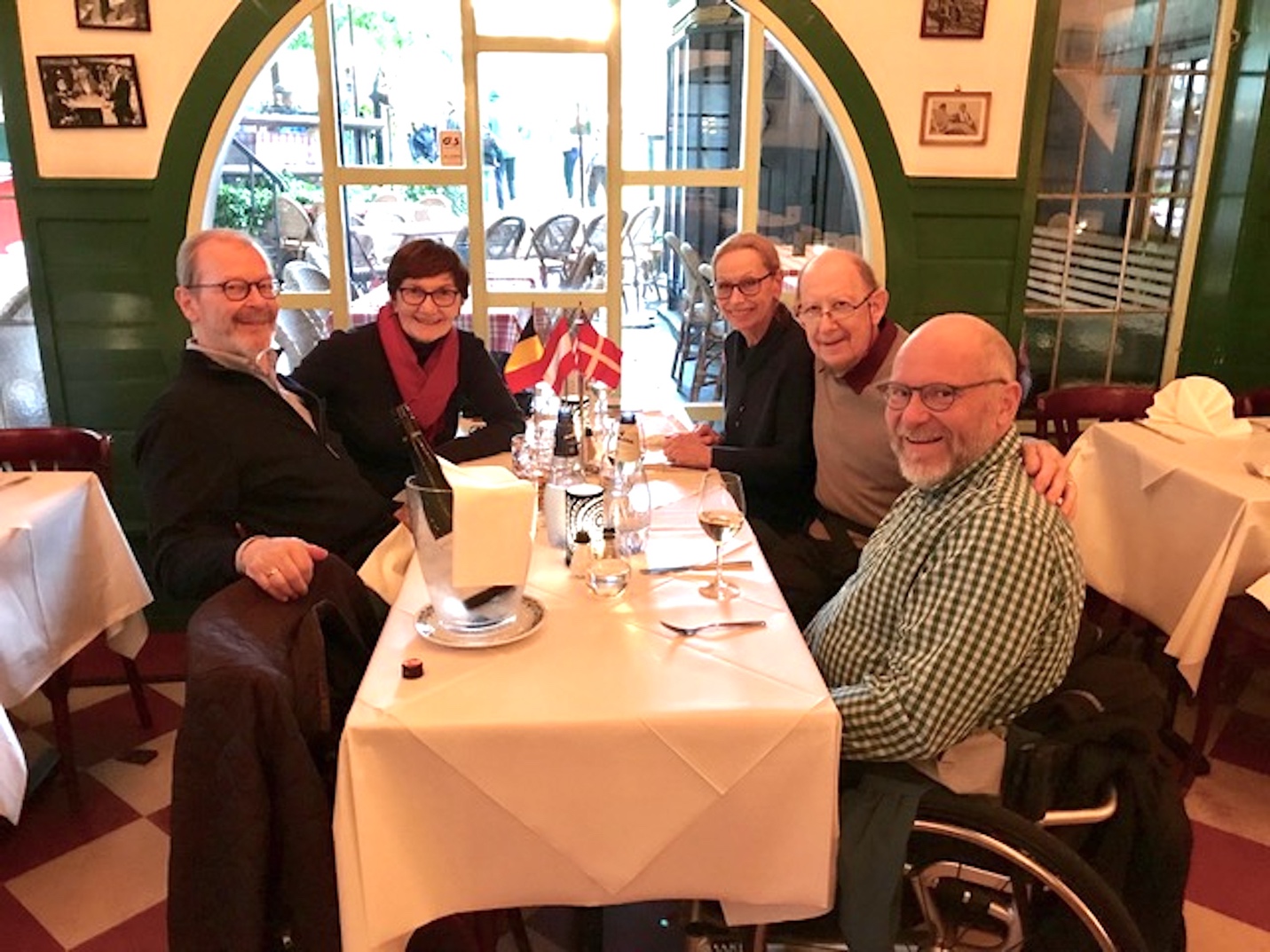 Tivoli (opened 1843) is a great introduction to Copenhagen. Part stylish amusement park and part lovely gardens, it is a total entertainment complex with fine restaurants. Its buildings reflect the architecture of the surrounding historic city center structures. Strolling under Tivoli’s large shade trees is a cosmopolitan experience from another age. 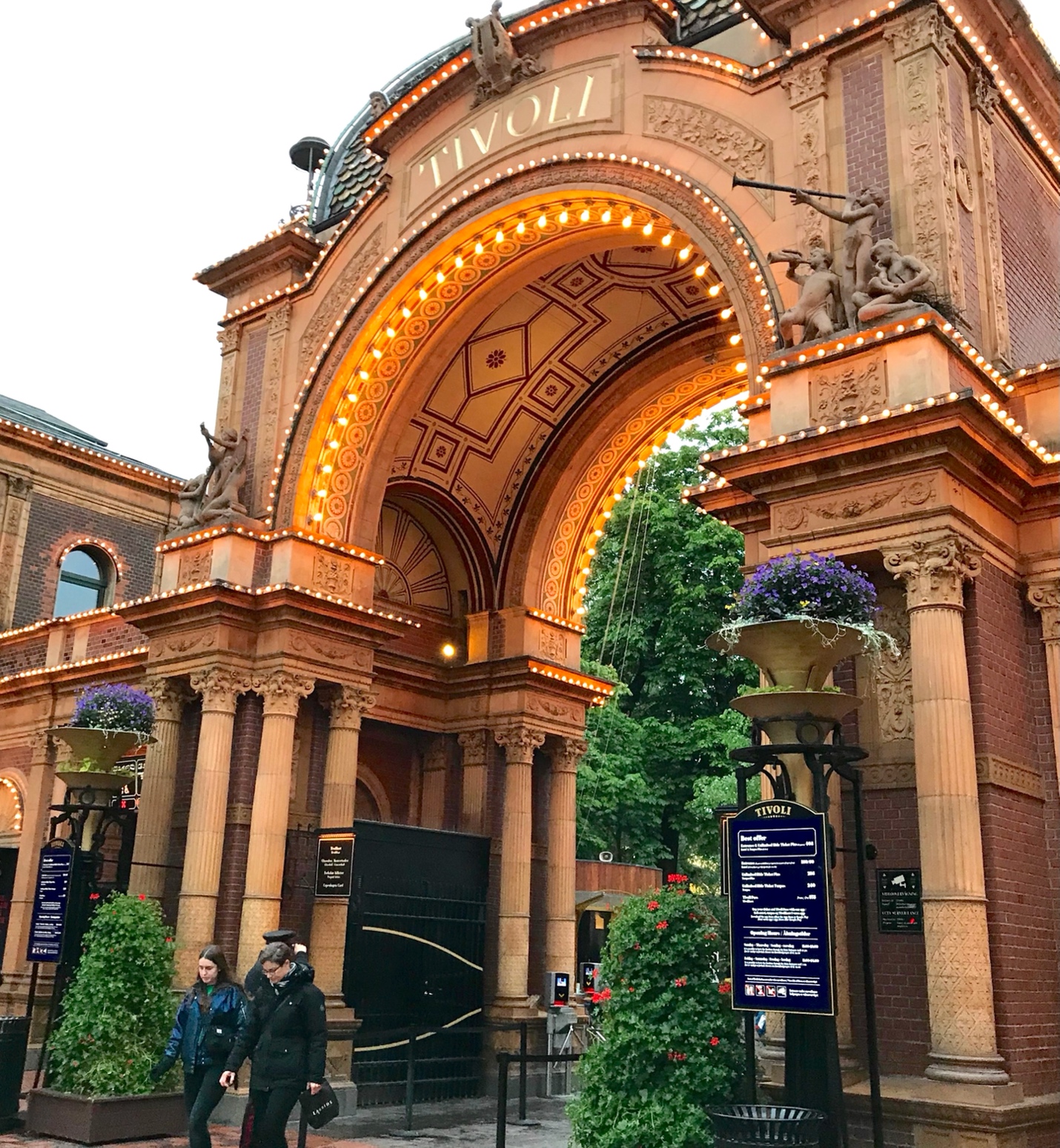 The main entrance to Tivoli Gardens.

I had been to Tivoili many years before as a college student and had fond memories of it. To go back so many years later with David and dear friends was very special. To no one’s surprise, Henning and the Cohnens got along famously even though they had never met before.

Dinner at Grøften was a gregarious feast. Our waitress was delighted to be serving old friends reuniting, and brought little flags to the table as a centerpiece when she discovered we came from four different countries. 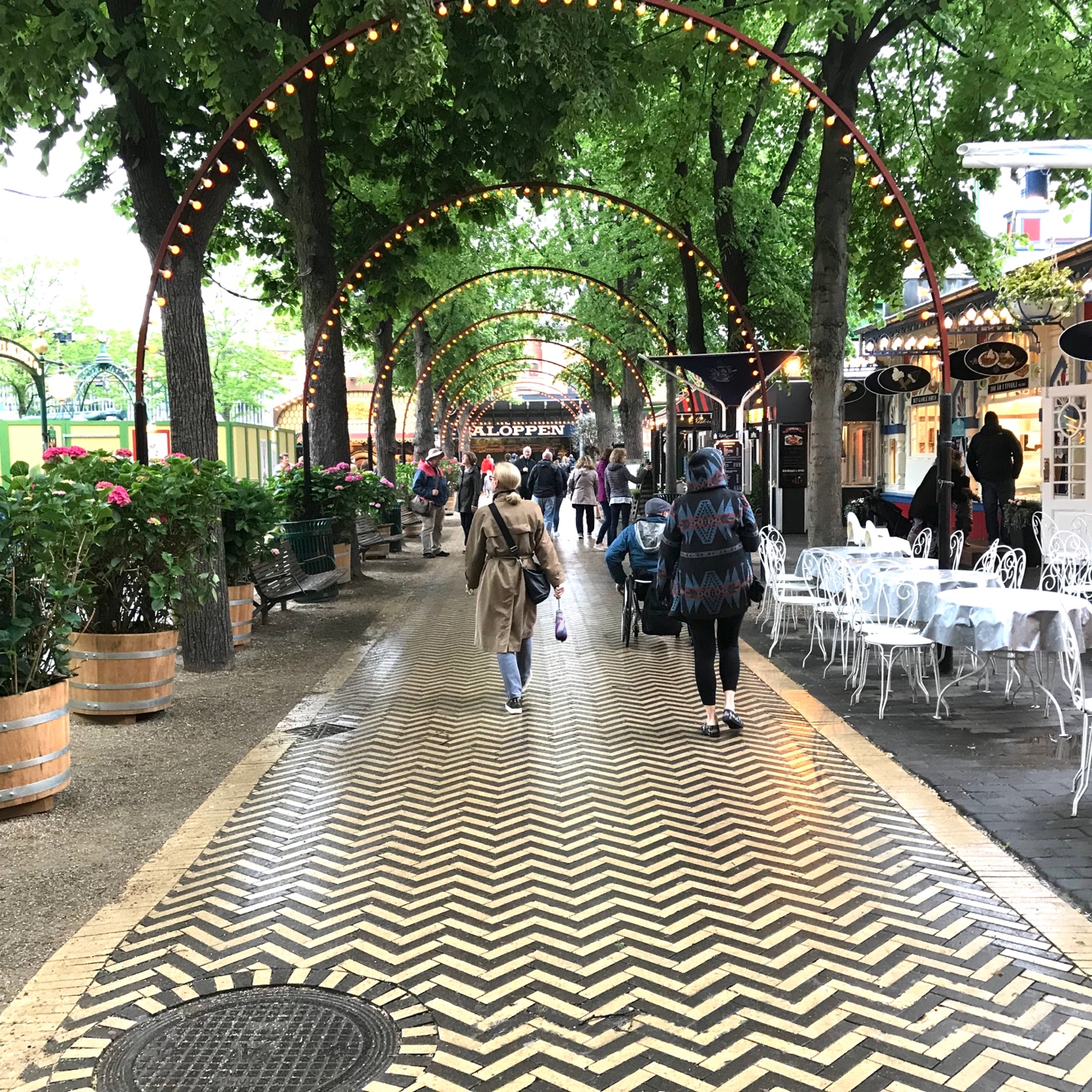 Helga and Linda strolling in Tivoli in a soft rain.

I've always found that the best trips are ones spent with good friends showing you around their turf. Guide books are fine, but they never take you to the out-of-the-way places that locals frequent. So the next day, we set out to discover “Henning’s Copenhagen.”

Henning wanted to show us Old Copenhagen—a maze of intersecting, narrow streets, near the University of Copenhagen (founded 1479) where he earned both his bachelor’s and master’s degrees. The buildings are historic, as are many of the shops fronting on the cobblestone or bricked streets. A highlight of our walking tour, which lasted several hours was A. C. Perch Tea Merchants (founded in 1836), a must stop for us.

Our days in Copenhagen flew by as I tried to be a good host. Sharing some of the places I love—and often take for granted—with dear friends as well as their friends was a treat. Fortunately, we have many of the same interests, which makes things so much easier.

But maybe most importantly might be the ability to appreciate the simple pleasures in life. Seeing great works of art and architecture is all fine and dandy. But sitting at the table in the morning eating pastries with the same joy is not something everyone can do. For some of us it is a gift that comes or is enhanced by the realization that life is both fragile and precious. Having lived with a chronic illness is an opportunity for such a realization. It doesn’t even matter whether you are the one with the illness or you are a close family member, like Linda.

It's easy to get lost in Copenhagen if you don't know your way around. But there are always cafes in delightful squares and throngs of people enjoying life. The old streets are often paved with cobblestones much flatter than in Glasgow, which I can navigate in my custom wheelchair with ease. Most streets are covered totally in smooth asphalt. A lot of Copenhageners ride bicycles on these same thoroughfares, some of which are too narrow for cars. 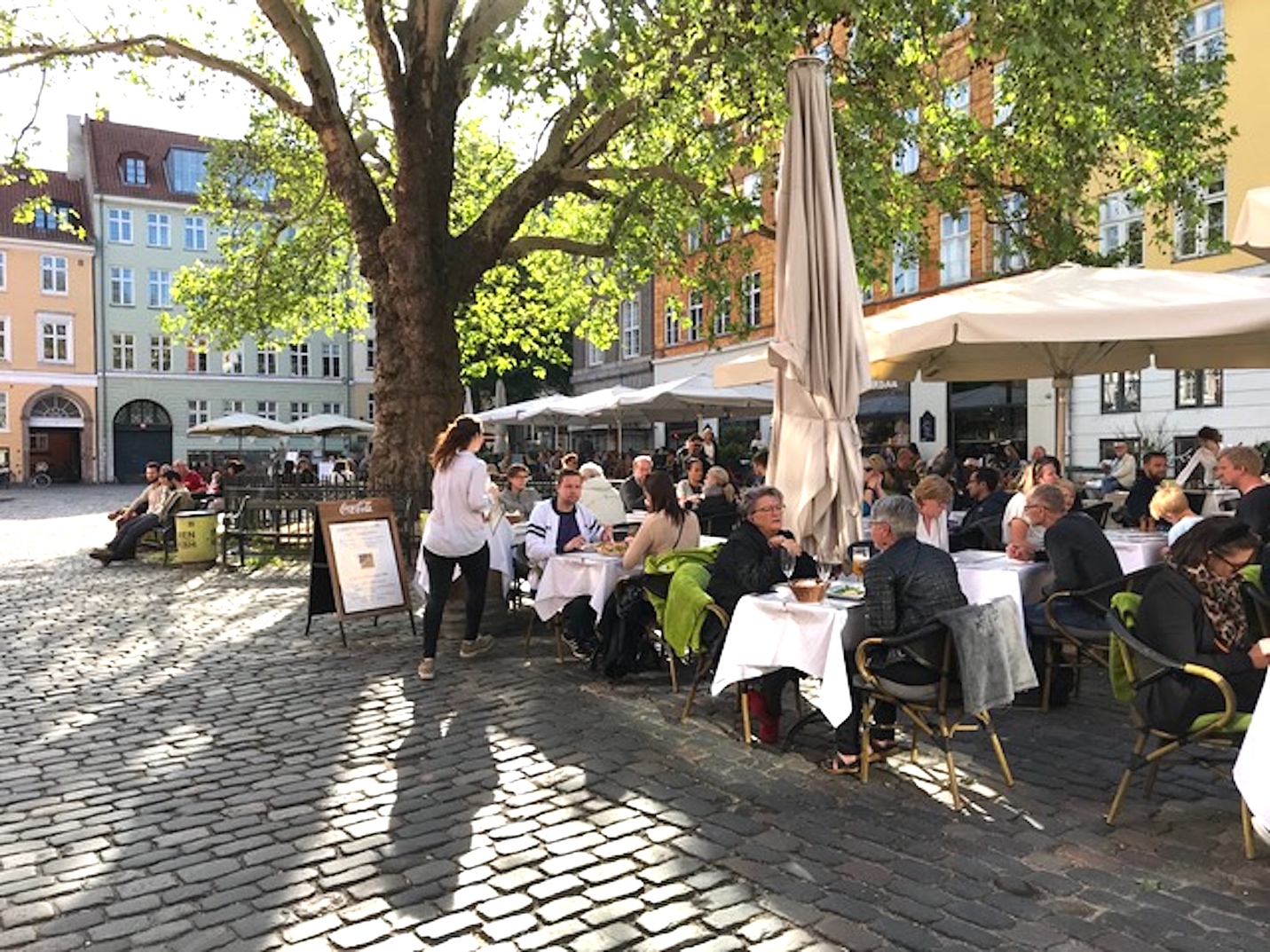 One of the many delightful public squares in Old Copenhagen.

After several hours of walking, talking and window shopping, we began to get hungry. It was a Saturday evening. The spring weather was fine—dry and sunny and pleasantly warm. And the restaurants were filling up fast. I had forgotten to make a dinner reservation, and our group of five was beginning to seem much larger, as we were turned away from one cafe after another. It was now peak dinner time.

Finally, one restaurant I knew and liked suggested we try a brand new cafe a few blocks away. They highly recommended the chef. By now foot sore, we looked at each other and said "Why not?"

We arrived, not knowing what to expect. The glass enclosed space was welcoming and alive with good cheer. We were immediately seated, and told that the meal was préfixe, and that the funds collected that night were to benefit a cancer research fund. The waitress was lively and bantered with us, explaining the various courses, which seemed inventive and yielded new gustatory discoveries. And it was for a good cause. It was pure serendipity.

We went out into the night well-fortified for another 2 hours of walking among Copenhagen's palaces and impressive government buildings. Henning had taken us on a long arch beginning at the Cohnen's hotel in the city center, through Old Copenhagen and back. It's a day we will long, fondly remember and whetted our appetites to return soon to this fascinating city.