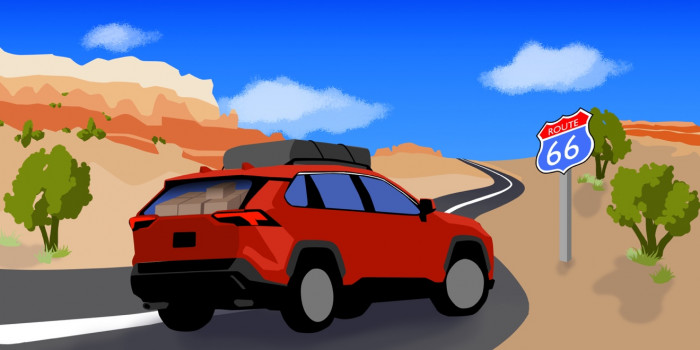 On Thursday morning February 18th, Ann and I packed the car for our road trip. It was a cold and snowy morning in Chicago, so we hadn’t packed the night before because we were afraid to leave the dialysate in the car overnight in 20 degree weather. I also wanted to dialyze that morning before we hit the road, so while I dialyzed, Ann and my son Johnny, packed the car.

Packing for road trips is much different than it used to be pre-home dialysis. In addition to our clothing, a cooler, and other supplies, we now had:

Of course, we also had the cycler to pack, so as soon as I was done dialyzing, Johnny and I carried the cycler out to the car. It took us a little over an hour to pack the car and the overhead carrier and to finally get our two bikes onto the bike rack on the back. Our Rav 4 was so tightly packed that we barely had enough room left for the two of us. I had scheduled future deliveries of more dialysate and cartridges with NxStage in advance.

We left Chicago on the snowy winter day at around 1:00 with the goal of making it to Mesilla, New Mexico by Saturday afternoon, so I could dialyze that evening. On the first day, we drove to Springfield, Missouri. We realized that because it was still going to be cold overnight, we had to bring in all of our dialysis supplies (including the cycler) into our motel room. This was an added burden we hadn’t really planned for in advance, but luckily it only took about a half hour to unload. Needless to say, we slept well that night. We packed everything back into the car the next morning and headed for Tucumcari, New Mexico.

This portion of our journey was to take us through the panhandle of Texas. We listened to the news carefully that morning because this was during the time when the state of Texas experienced state-wide power outages and water shortages due to the cold snap that hit the country. We were afraid that we might find ourselves waylaid in Texas by the weather. I had a dialysis schedule I wanted to keep, which did not include a night in Texas. Luckily, as we made our way through Oklahoma, it became clear that route 40 through Texas was clear. 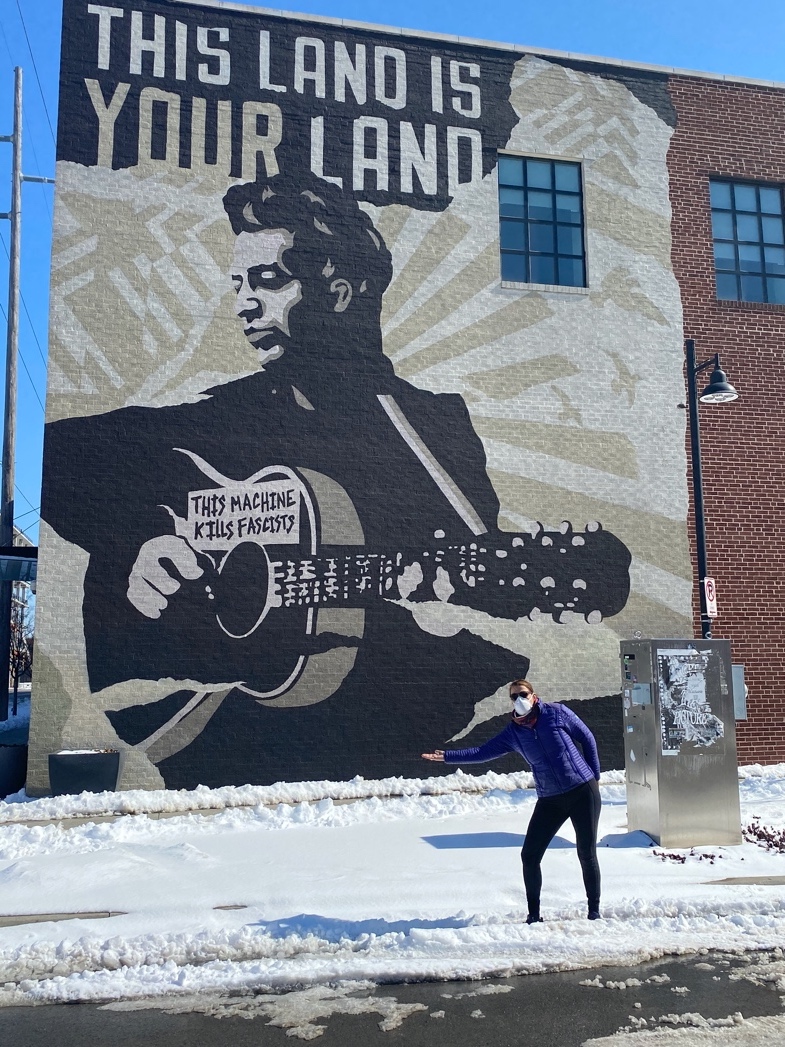 Knowing that we would not be slowed by the weather, we decided to make a stop in Tulsa, Oklahoma to visit the Woody Guthrie museum. It seemed appropriate that we pay homage to the man who wrote “This Land is Our Land” while traveling across country. Because of COVID, the museum like many other institutions across the country, had been closed to the public. We had tried to contact the museum in advance to see if they were open but could never connect. We got off the road in Tulsa hoping that it might be open. When we first drove up to its entrance, Ann went to the door but it was locked and no one answered when she knocked. We were momentarily disappointed but decided to take a quick little tour of that area of Tulsa before we hit the road. We then got back into the car ready to hit the road but decided to stop in at the Guthrie Museum one more time. This time, we spotted someone inside who answered when we knocked and let us in. We essentially had the place to ourselves. Not bad, given that we hadn’t been inside any museum, restaurant, music venue or other indoor space where people gather since the spring of 2020.

Our drive through Texas was uneventful and we arrived in our destination, Tucumcari, for the night. We had always wanted to visit Tucumcari because of the Linda Rondstadt and Lowell George song “Willin.” It was also known for its strip of hotels and restaurants along Route 66. We arrived at night but decided to take a quick tour of Route 66 the next morning before we went on to Mesilla. Route 66 in Tucumcari is a symbol of the devastation that has destroyed small town American businesses over the past half century. The motels that once housed thousands of motorists passing through were now empty shells with broken windows and walls covered in graffiti. There were only a couple of surviving businesses left on the strip. They had been displaced by new chain motels right off Interstate 40. Not sure what happened to all of the folks who had worked in the various establishments on old Route 66, but there were certainly not enough jobs for them in the small number of new hotels along the interstate.

By 2:00 p.m. on Saturday, February 20th we arrived in our Air B and B in Mesilla. It was time to dialyze so we unloaded the car, set up the cycler on a small table next to the couch in the living room with a view out the window, and set up for a treatment. I was hooked up and dialyzing by 4:00 pm. While I had my treatment, Ann unpacked our clothes and other things for our 9 day stay in Mesilla. 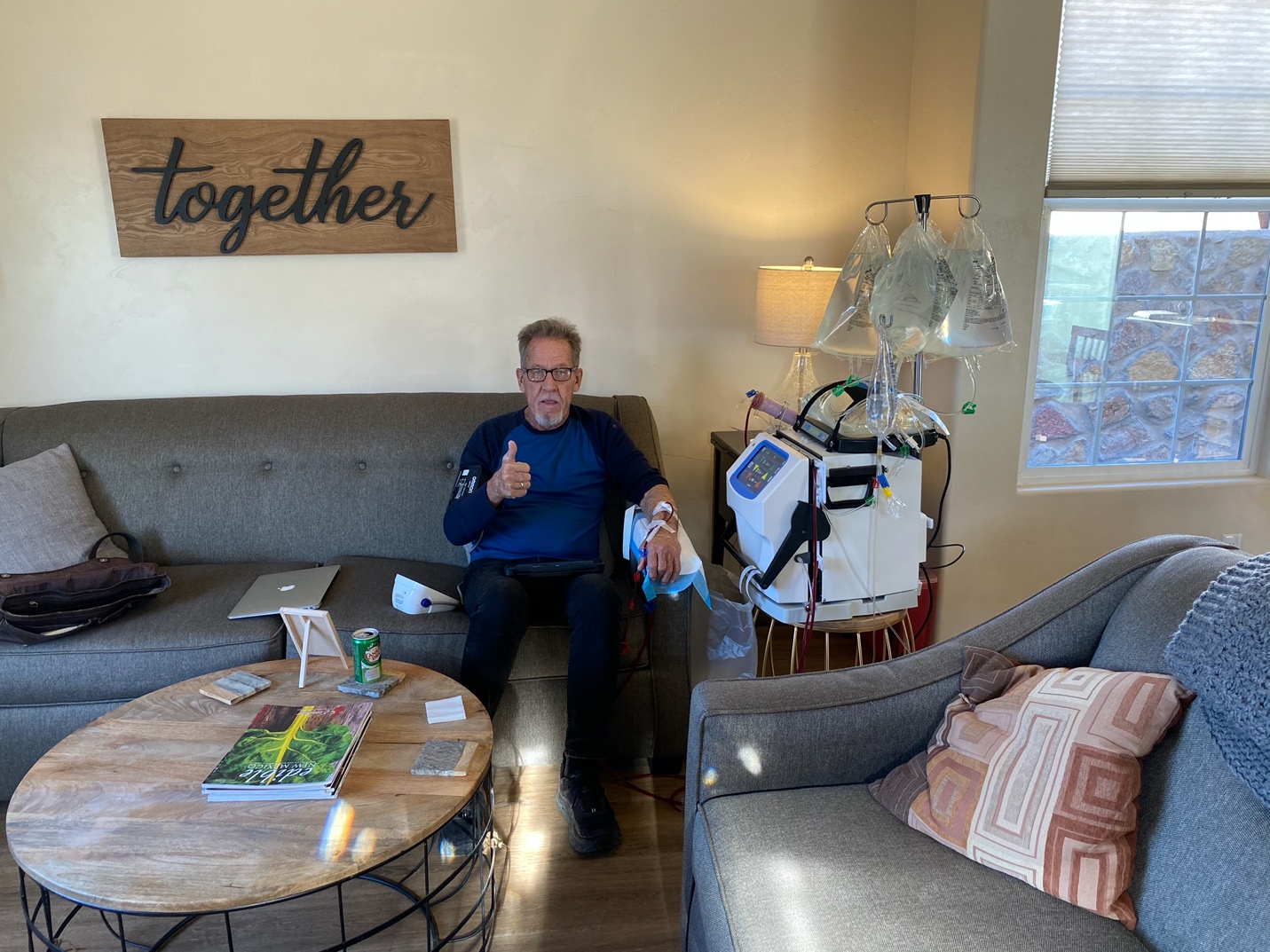 Mesilla is a pretty Mexican village on the southeastern periphery of Las Cruces. It was the town where U.S. troops raised the American flag to seal the deal on the Gadsden purchase, so while it officially incorporated the village into the U.S., it still feels like you’ve stepped into Mexico. The community is centered around a town square or “Zocalo.” The church stands out as the dominant building on the square with shops and restaurants around the periphery.

We received our first shipment of dialysis supplies in Mesilla. We had ordered enough to last in Mesilla and Tucson, our next stop, which takes us to March 8th. Luckily, our Air BnB was large enough to store the 20 boxes we had delivered. Rather than the 4 days a week of dialysis that I normally do at home, we decided to try every other day to provide more time for exploration. We will see how this impacts my labs when I send those in at the beginning of March.

We spent our days there hiking in the surrounding mountain trails and biking through town. Mesilla is relatively flat, so biking was not difficult but allowed us to get a ground level view of the town in a way that driving does not afford. It also allowed us to explore a larger area than we could walk. We scheduled dialysis sessions based on what plans we made for any given day. If we hiked in the morning, we would dialyze in the evening. We also had friends that were staying in Mesilla so we coordinated activities with them, including dinners outdoors. 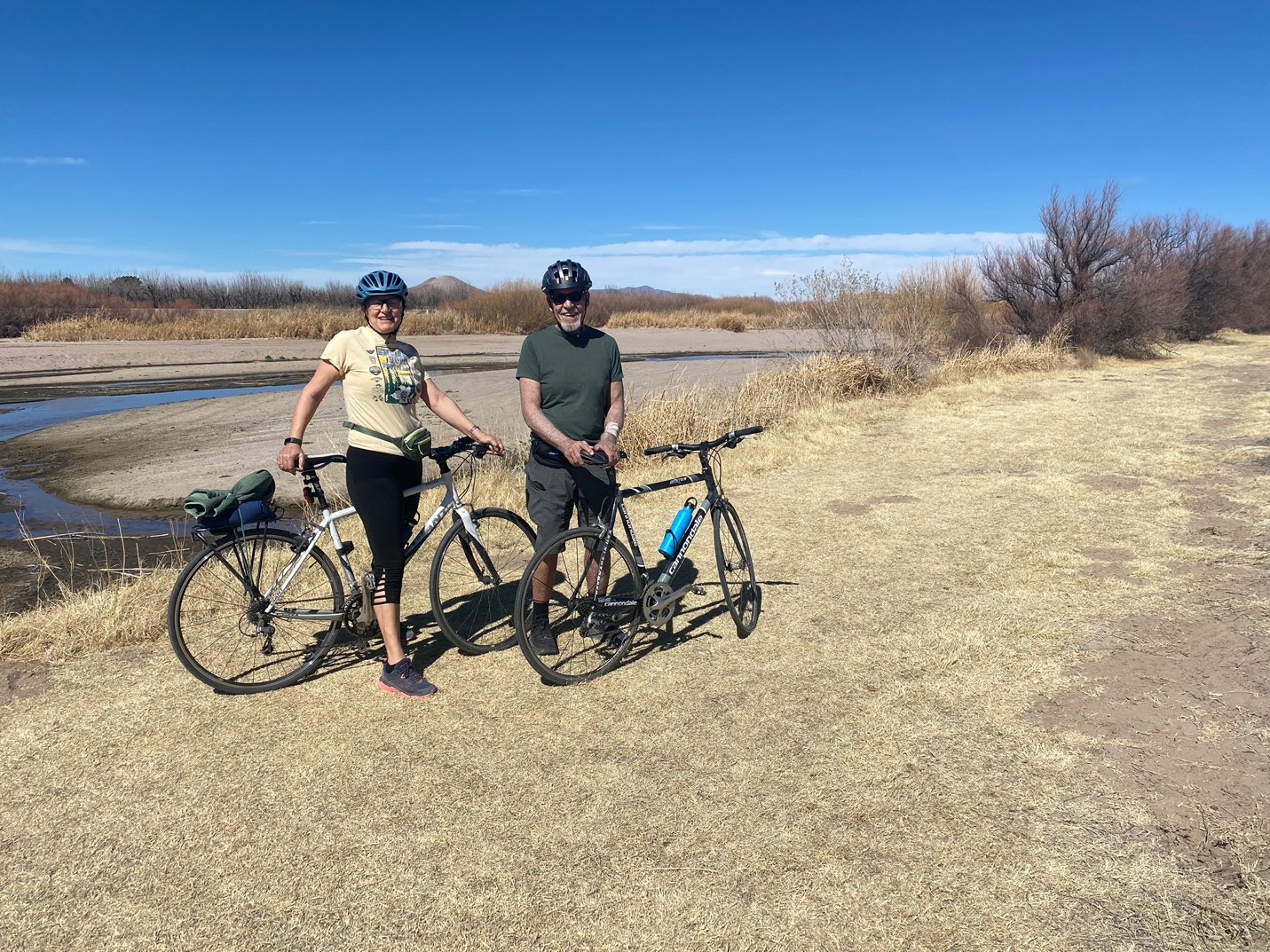 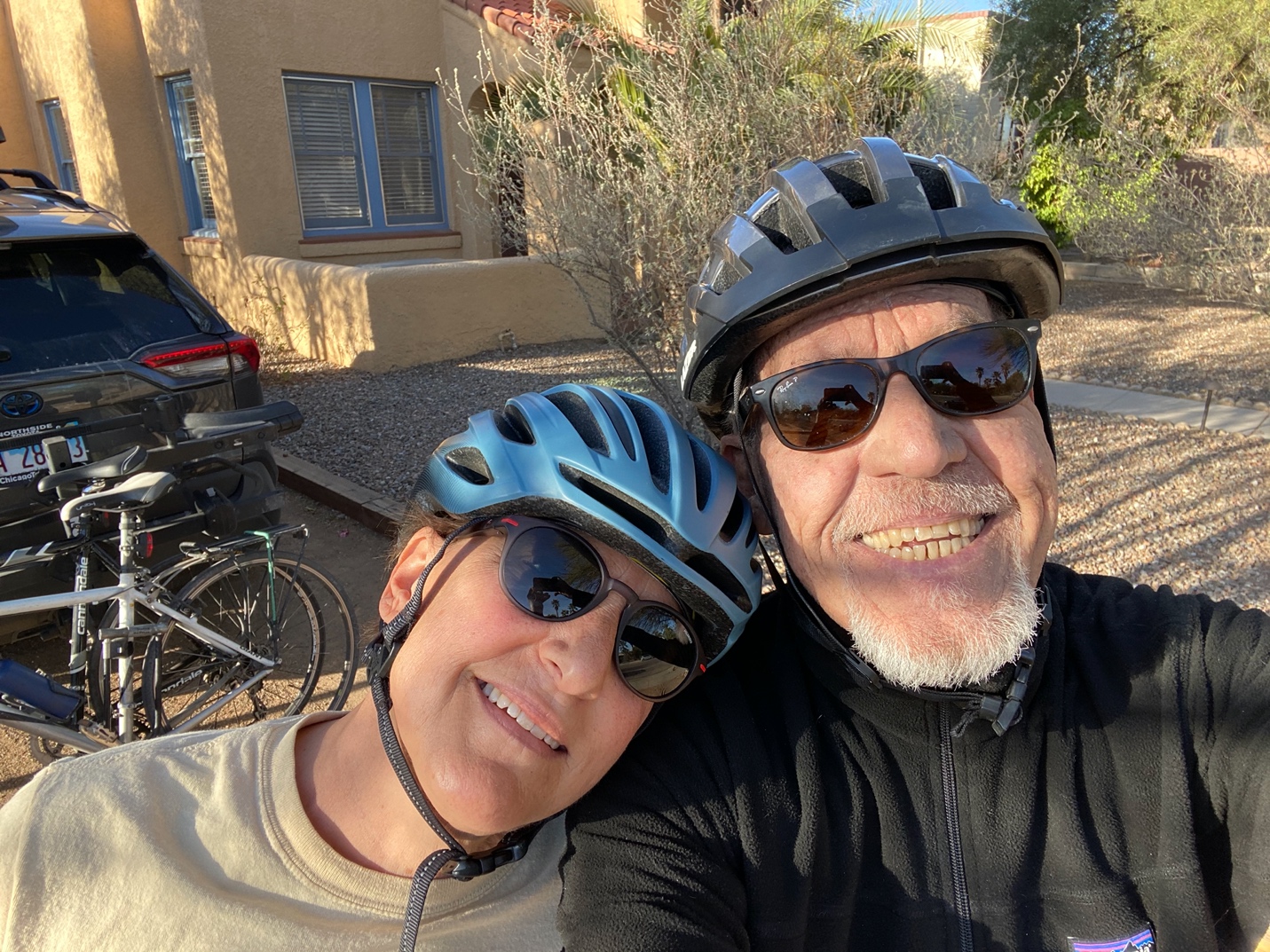 Hikes to Dripping Springs, the Slot canyon, and Soldedad canyon were among the most memorable in the area. We also drove two hours north on one non-dialysis day to Bosque del Apache, a nature preserve where we met friends from Santa Fe. The preserve is a gathering place for migrating birds and we were fortunate to be there as thousands of White Snow Geese took off over our heads in mass. The sound of thousands of wings flapping as they took off from the water was awe-inspiring as was the silence that followed when they were directly overhead. We also ventured out to the White Sands for a day-trip. It’s like no other place I had ever been. We had gone on the evening of February 27th to be there when the sun when down and moon rose. We thought that would be the best place to catch a glimpse of the “Snow Moon.” It turned out to be the only cloudy evening of our trip so far so we never saw the moon rise over that landscape but we still managed to sled down the sand dunes and capture eerie scenes of the never-ending sandscape.

Ann and I packed the car with supplies and the cycler on March 1st to head off to Tucson. The drive from Mesilla to Tucson took us through the Gila Wilderness Area, a mountainous drive through winding roads that skirted sheer drop offs. It was incredibly beautiful, and at times frightening and rather deserted. We only encountered a small number of travelers along this road. We then arrived in Silver City, New Mexico where we decided to get lunch. We found a small restaurant that had been recommended by a friend. We put on our masks and went in and found that very few people were masked-up so we placed our order and went outside to wait for it to be ready. We then went to the local riverside park to eat. We had been very careful to avoid people indoors and were not about to engage in mask wars with other folks who felt that masks were an infringement on their freedom.

We arrived to our place in Tucson on the afternoon of Monday, Mary 1st. Since I had dialyzed the day before, we did not have to rush to set up for dialysis that evening. Instead, we were able to visit Ann’s older sister and husband who lived there. Tucson was the place where my kidneys had failed in 1982 and Ann’s sister Mary and her husband Corky helped to take care of us at that time so this visit was already bringing back somewhat painful memories. We spent the week in Tucson hiking and biking as usual, and visited some of our old haunts that we had frequented back in 1982 before kidney failure compelled us to head to Chicago.

Tucson had changed rather dramatically in the 40 years since we had lived there. The very small apartment that we had once lived in on 7th street just off of 4th Avenue was now a storage room for a bar called Che’s on the corner. The shared backyard of the rows of apartments we lived in was now the outdoor patio for the bar. Needless to say, we had to drop in for a drink in the evening. The tables were well spaced apart so we felt safe enough to remove masks. There was now a downtown that didn’t exist before as well. We took a hike up Tumamoc Hill in Tucson. The trailhead is right across the street from St. Mary’s hospital where Ann took me after I got sick in 1982. It felt good to be looking down from our hike on the place that had first diagnosed my kidney failure. I had thought my life was over. I had not thought in 1982, that I would live another 40 years let alone able to travel, hike, have two children and a blissful marriage during all those years in between then and now. 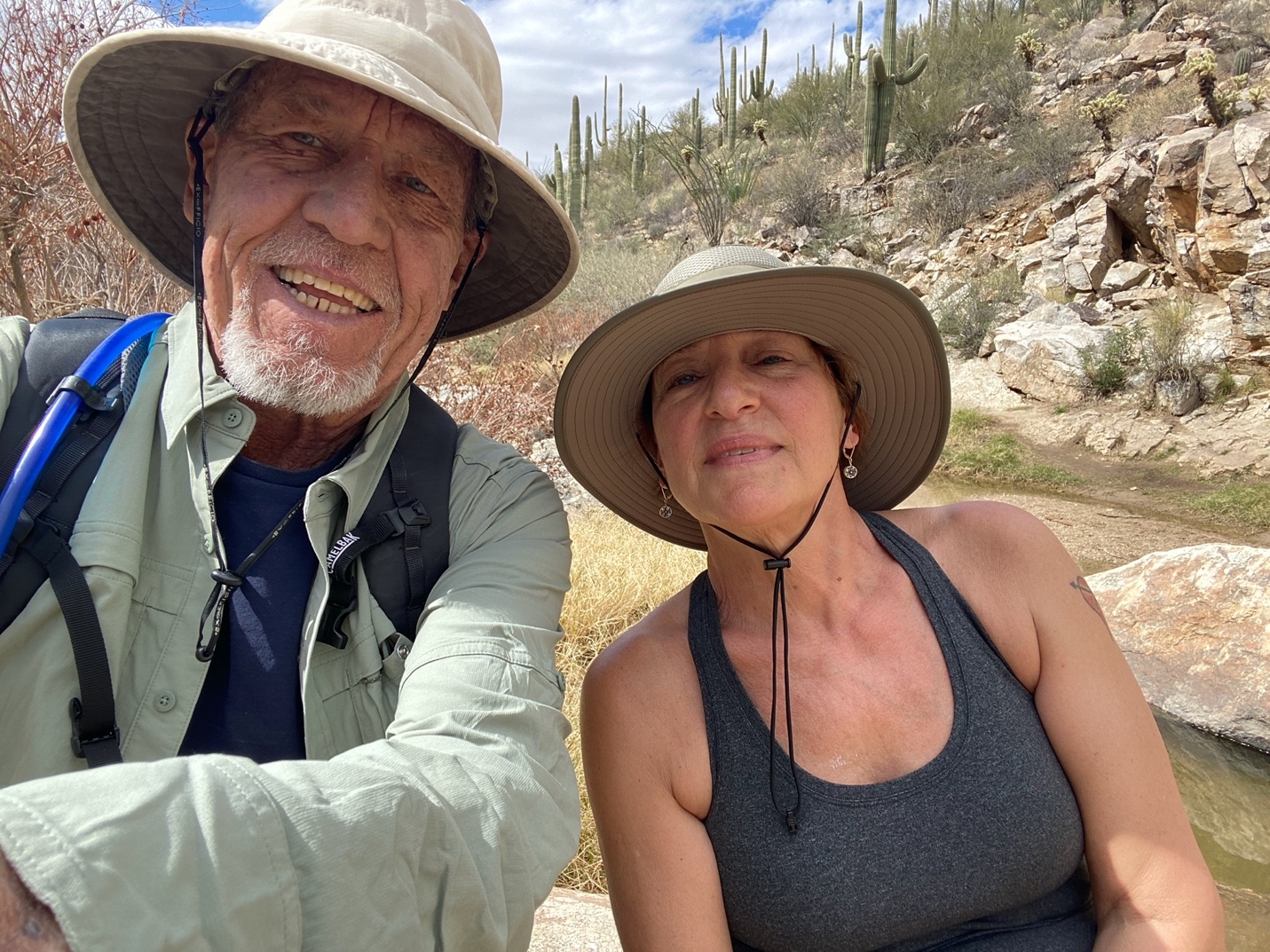