This blog post was co-authored by Henning Sondergaard , David Rosenbloom and Linda Chiavaroli on June 24, 2021. 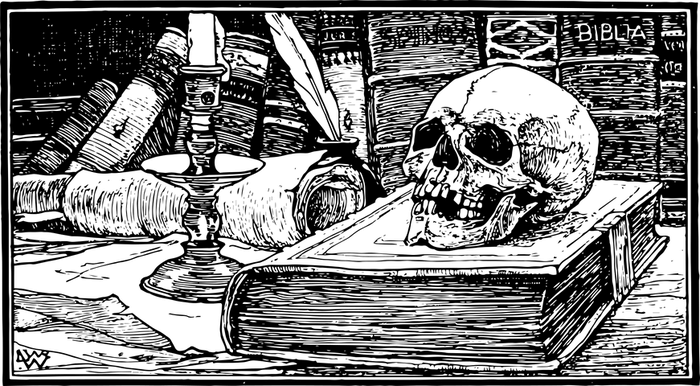 Authors' note: This is the 14th in a series of blogs about our adventures traveling in Europe in 2019. They will appear here on the fourth Thursday every month and will eventually be compiled into a book entitled: "Taking Chances, or How to See the World Living with Chronic Illness."

In Scotland I learned more about lighthouses than I ever thought I would learn. Traveling some of the most beautiful coastal terrain and to the Museum of Scottish Lighthouses at Kinnaird Head with two lighthouse enthusiasts, David and Linda, (junkies may be more a more apt description) was just fabulous.

Even though I had bragged about how Denmark had the best lighthouse in the world with the fanciest building, I was a little apprehensive having to go back to show them. The lighthouse I was talking about in such cheeky terms was the one at the top of a corner tower of Kronborg. The castle sits on a spit of very strategic land in the town of Helsingør, where the body of water known as the Kattegat forms the gateway to the Baltic Sea. When Shakespeare wrote Hamlet around 1600 A.D., Kronborg was the most impressive new castle in all of Europe and probably the reason why it became the setting for the play. Elsinore, Hamlet’s castle, is actually the anglicized name for Helsingør. 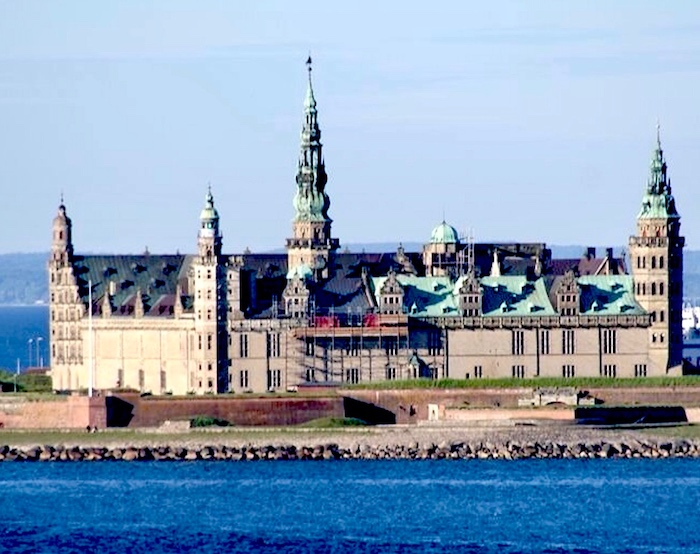 The fortress/palace known as the Kronborg, a symbol of Danish power in the Baltic Sea. 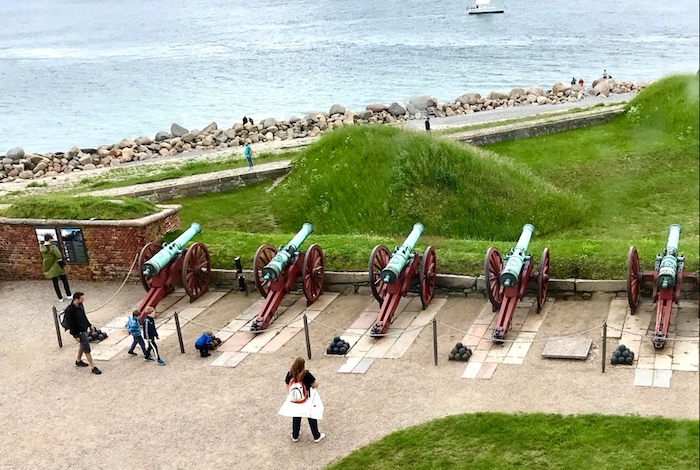 Ramparts with cannon controlled the Øresund, the only navigable strait between the Atlantic Ocean and the Baltic Sea. Pay tribute to the Danes or do not pass.

Visiting Kronborg according to David is way better than Disneyland or any similar theme park, because it’s the real thing—very old, very impressive and fascinating. It reminds me of Windsor Castle in England—so big it resembles a small town. And you might even see Hamlet’s ghost on the ramparts.

When we drove up to the Kronborg, I had no idea there were walls within walls within walls—the inner, middle and outer fortifications. I saw a stone entry gate and drove over to a nearby parking lot. But when you travel with Henning, you have a disabled persons parking permit on the dash. This is very handy in any big city or tourist attraction. I should have assumed this castle had disabled permit parking, but didn't see any signs so I parked where other visitors had.

Henning had gotten out and slid into his wheelchair, which was in the car trunk. A guard had seen this and began waving his arms wildly at us. Hans and Helga were with us, and Hans pointed out the guard who was running towards our car. Oh man, what had I done wrong?! 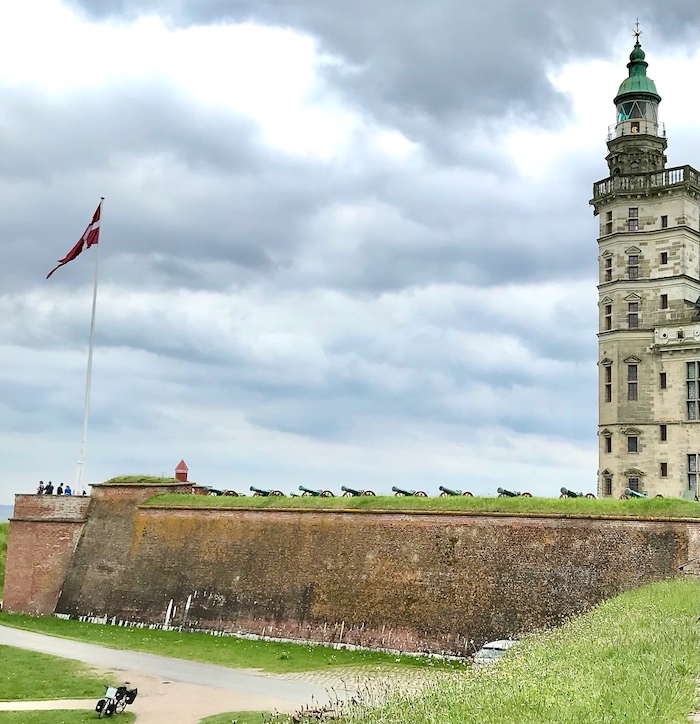 Nothing, it turned out. He wanted only to inform me that there was disabled parking, and that I should follow him. And follow him I did, in my impressive rented Volvo that accommodated the five of us, plus the wheelchair and our cover-ups. (Whenever you are near the North Sea, you carry a cover-up.)

I proceeded at a regal 10 mph, past all the defensive walls, gates and moat, carefully parting throngs of visitors who looked at me like “Who is this VIP?” It was more of a procession than a drive, and ended at a gravel strip just outside the main gate to the Kronborg. Still no disabled parking sign. But Henning did later discover an ancient-looking stone marker submerged in the grass with the disabled wheelchair symbol etched on it. Do you suppose disabled knights had special stable privileges in the castle?

I was in wonderment. I have many years practice as a tour guide, having led tours of museums and historic buildings, but this day I had no desire to lead others around. I was a 10 year old again, anxious to explore and lose myself in the magic castle, where live actors periodically appeared in the courtyard doing scenes from Hamlet. I totally lost track of time as I rambled through one room and floor after another, each time finding myself transported back centuries while learning about Danish history. 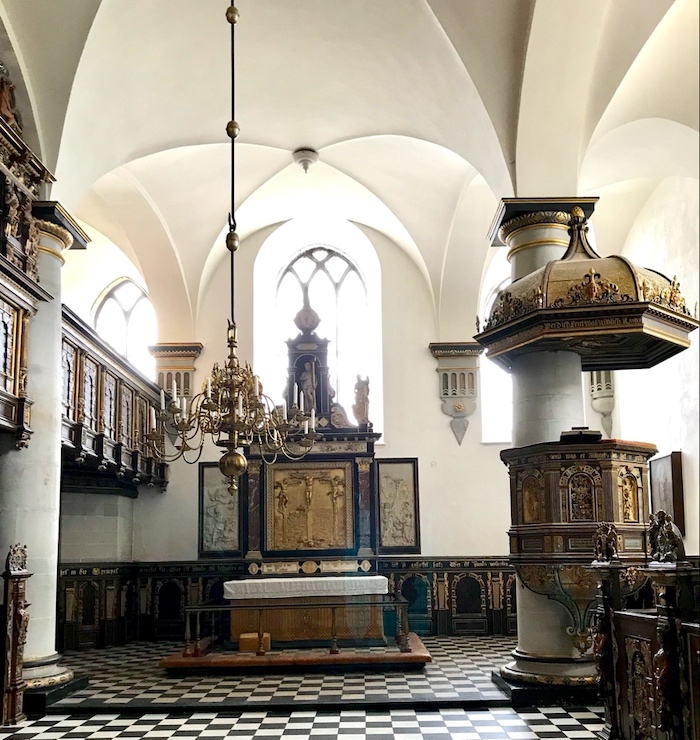 The King’s Chapel, the height of Dutch-Flemish Renaissance architecture.

The King’s Chapel was particularly impressive. Built in 1582, it is the height of Dutch-Flemish Renaissance, with its white walls, vaulted ceilings and black and white tiled floor, elaborately carved altar and pews, gilt chandeliers and pipe organ. Truly fit for a king. 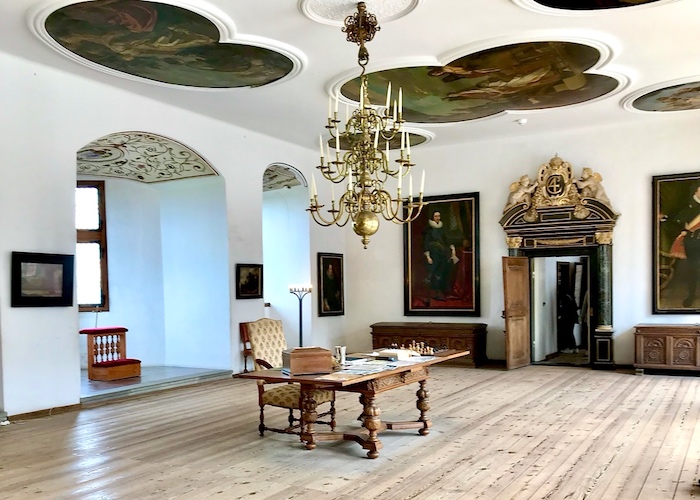 The King’s chamber with its beautiful murals painted on the ceiling.

As were the Royal Apartments. Refurnished after the fire in 1629, the ceilings are richly decorated in frescoes of pastoral settings. The King’s chamber has a large bay window directly over the main portal to the castle, from which he could see guests arriving.

Two hours later, after wandering from one great room to another on three floors, I entered Northern Europe's largest ballroom (203 x 40 ft.). Built 400 years ago to impress, it held me in thrall. A throne was set up at the far end, and one could imagine dignitaries and potentates from all over the world paying homage to the Danish kings and queens. 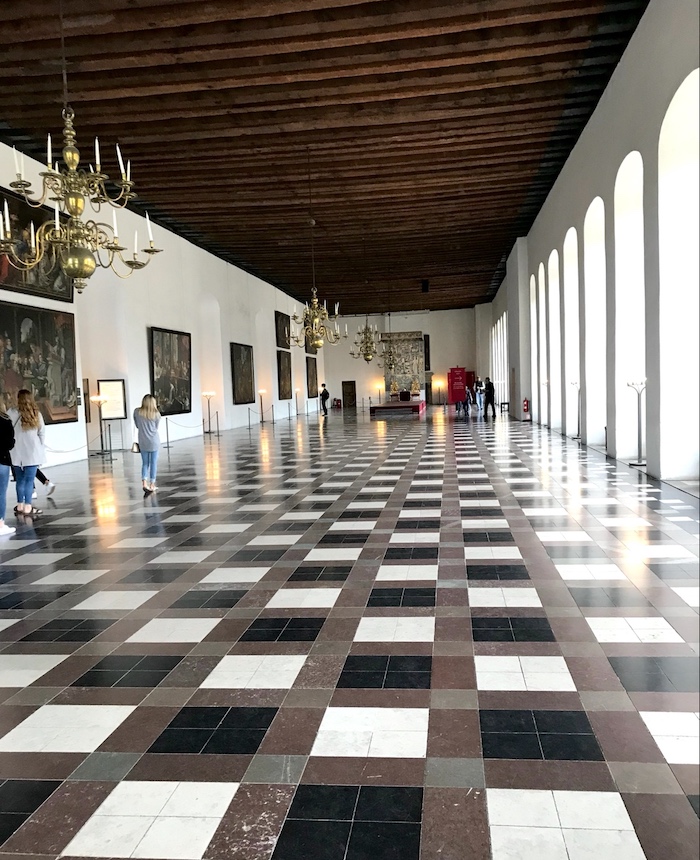 Northern Europe’s largest ballroom, designed to impress, with monarch’s throne at one end.

Throughout, there was a no-nonsense feeling that “less is more.” Dutch-Flemish Renaissance can be rather restrained and is much more to my liking than the decorative excess of the Baroque or Rococo. Kronborg exudes power and propriety and is a lasting monument to a small but important nation.

Naturally the first part of Kronborg I sought was the lighthouse. Henning is indeed correct. The Kronborg lighthouse does have the most magnificent structure of any I’ve experienced. The castle is also full of stories.

Lighthouses are placed as guides to mariners near waters that are difficult to navigate. Kronborg stands at the narrowest point of the Øresund (The Sound). (The Swedish coast is only 2.5 miles across the strait.) The castle was built by King Frederick II to control this strategic point in the waterway, at the time, the only entrance to the Baltic Sea. If you didn’t pay a toll to pass through, heaven help you.

The castle is a daunting stronghold, its original purpose well before any thoughts of grand royal apartments. The massive outer walls of deep red would discourage any thoughts of attack. Kronborg also has impressively eerie tunnels underneath that are cold and damp (bring a cover-up!). But exploring these dark passages—and yes, there are dungeons—is worth it when you come upon the stop-in-your-tracks statue of Holger the Dane. Holger is a national hero who has slept for hundreds of years. According to an old legend, “Holger Danske” will wake up the day Denmark is threatened by enemies. Only then will his eyes open. He will get to his feet and raise his sword. 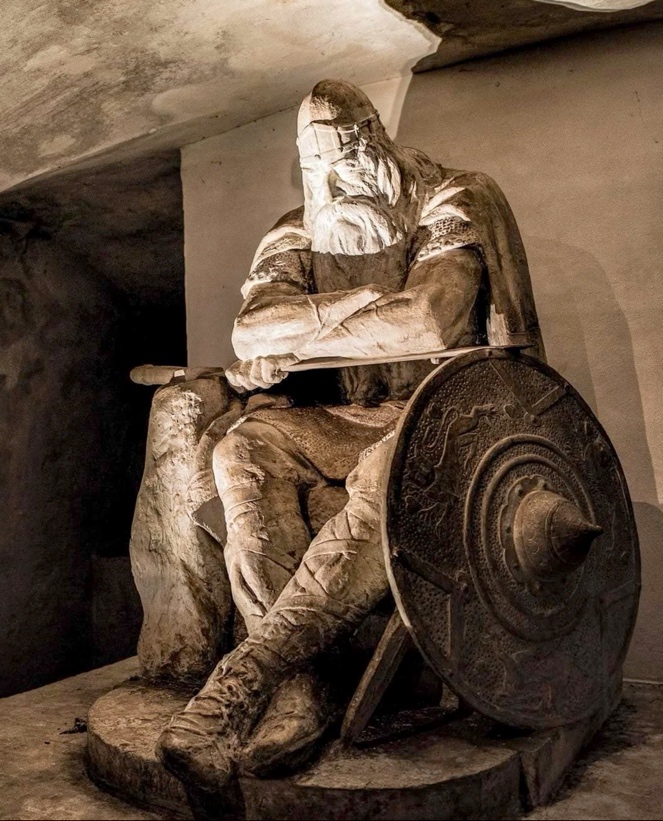 The upper floors are the best place to behold the battery: a line of cannon pointed toward the sound as a warning to those considering not paying a fee to pass into the Baltic Sea. 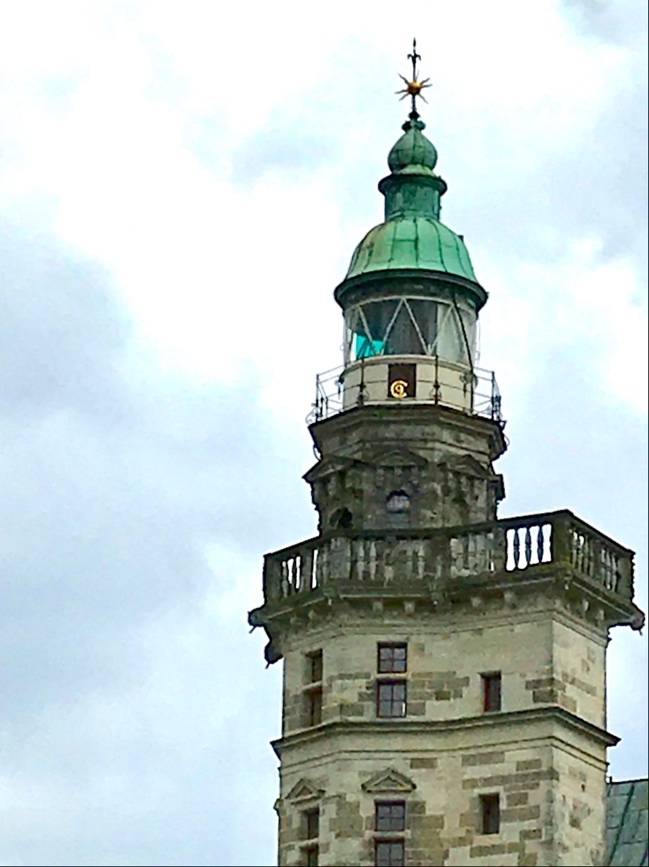 The Queen’s Tower with its beautiful lighthouse, a navigation aide to ships passing through the Øresund.

The Queen’s Tower, on the castle’s northeast corner, supports the lighthouse. A light was first placed in a window of the tower in 1772. This was a common practice everywhere for creating a quick and easy navigation guide: just pick the highest point and put some form of fire there. The elaborate housing for the light was developed in the 19th century in the style of the rest of the castle. The guard rail surrounding the lantern room bears the symbol of King Christian IX (a “C” with a “9” inside it) who reigned at the time of the lighthouse’s creation.

Thank you, Henning, for allowing us to add this most beautiful example to our log of lighthouses visited.

Historic structures like the Kronborg or the great cathedrals of Europe (more about them in a future blog) are designed to remove you from the ordinary. It's a major reason to travel, because it opens your horizons and lets you see life from new perspectives. Having a disability may be a hindrance or require more pre-planning, but should not be an excuse to never travel to new places and meet new people. It took me 20 years to return to Europe, and it was worth the wait. 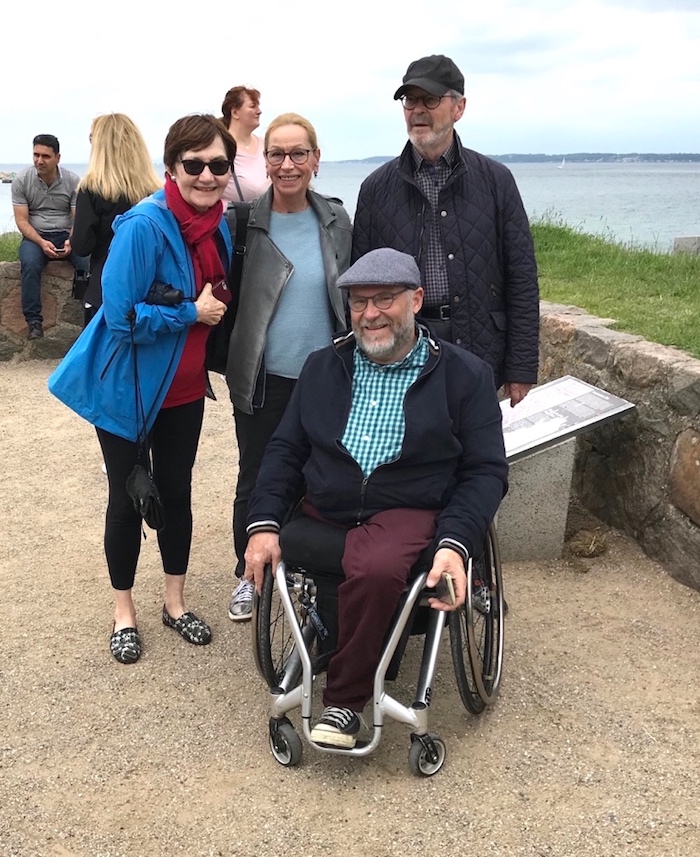 Four friends on the ramparts at the Kronborg. (L to R) Linda, Helga, Henning (in front) and Hans. David is taking the photo.