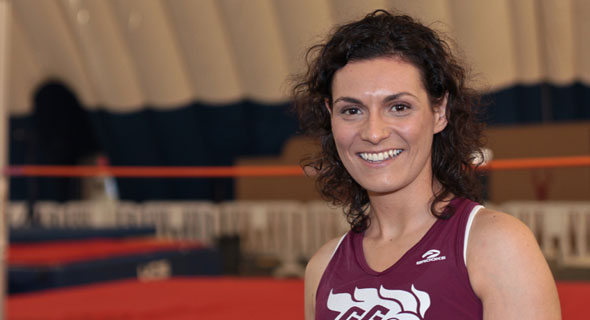 To say that Marie-Eve is a huge fan of nocturnal home hemodialysis (HD) would be an understatement. "I couldn't do the things I do—nursing school, a part-time job, and training as a high jumper—if it weren't for home HD," she claims. "It gave me my life back!" Now, Marie-Eve wants to tell others about the benefits of home HD. 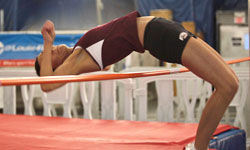 Marie-Eve went to Spain as an 18-year old student in September 2001. She planned to pursue language studies and continue her training as an elite high jumper. When she started to gain weight, she blamed it on changes in her eating habits. But when she got so dizzy she had to go to the hospital, she learned the real cause. She had a blood disease that was causing clots—and the clots had destroyed her kidneys.

After a month of every other day dialysis and plasmapheresis, she was stable enough to fly home to Canada. "My new reality hit me on the plane," she says. "They were giving out chocolates, but I had to say 'no' because it was not OK on a renal diet. My life had been changed forever."

Back in Ottawa, Marie-Eve met with her nephrologist to talk about treatment options. She chose to try peritoneal dialysis (PD). "I liked the more relaxed diet, and I didn't want a fistula," she recalls. "I was 19! I didn't want my arm to look like that." She liked PD and would still be doing it today, if a bad case of peritonitis had not made PD less efficient. "I was doing 9 hours a night on the cycler plus 5 exchanges each day, and still not getting enough dialysis. I had to make a change." She went back to in-center HD. 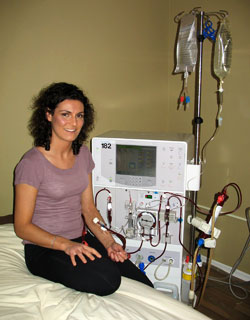 A nurse from the hospital's home unit thought that Marie-Eve should try nocturnal home HD. Marie-Eve was so determined to get her independence back that she said "yes." But, first, she had to get over her fears.

Marie-Eve had fistula surgery in January 2003. "If I kept a catheter, I couldn't swim, shower or do home HD. I had to do it," she says.

Using her fistula meant putting in needles—Marie-Eve's next hurdle. "I was so afraid," she recalls, but she was determined. Her mother helped her get over her fear. "She'd bring pieces of my favorite cheese, and I could have one if I got the needle in," she laughs. Today, Marie-Eve has Buttonholes and puts in her own needles without a second thought. "Anyone can do this if they want it badly enough," she insists.

Marie-Eve was put on the wait list for a training spot to do nocturnal home HD. She waited 7 months. In the meantime, she did her treatments in the hospital and trained for short daily HD. She started short daily HD in the summer of 2003, and in early 2004, a spot opened up.

Marie-Eve was so driven to get back on her feet, that she insisted on doing her home HD treatments by herself. No helpers. She has a Lifeline alert button she can press in case of emergency, and she does it all on her own.

After just one week of nocturnal HD, Marie-Eve was starting to feel better. "In 2002–2003, I was in a wheelchair," she said. "I was too weak to wash my own hair!" After that first week of home HD, Marie took a shower and washed her hair. "My mother spent the whole day on the phone telling people," she laughed.

These days, Marie-Eve is very much an active, independent young woman. She shares an apartment with her brother in Ottawa. She is in nursing school and works part-time as a personal trainer. And—best of all—she is once again training for the sport she loves: high jump. She joined the University track and field team and began training with them in earnest in fall 2010.

Marie-Eve does her treatments for 8–9 hours, 6 nights a week. "You have to have a day off," she said, "but I don't like my off day. I feel better when I dialyze." Her prescription pill count has dropped from 32 to 7 per day, and she can eat the foods she loves. "I haven't been in hospital for years," she added. "Before, it was three to four times a year."

Marie-Eve likes to tell other patients about the pluses of nocturnal home HD. She worked with the Shad Ireland Foundation in Canada to set up a 1-kilometer walk/run for dialysis patients in Ottawa. "We had 300 people take part," she said proudly. "We hope it will be even bigger next year."

"Anyone can do home HD if you want it enough," she claimed. "I was afraid of needles, I was afraid of the alarms. I couldn't sleep at first because of the sound of the machine, but I got over all that because I wanted my life back." She urges others to have the courage and confidence to try it for themselves.