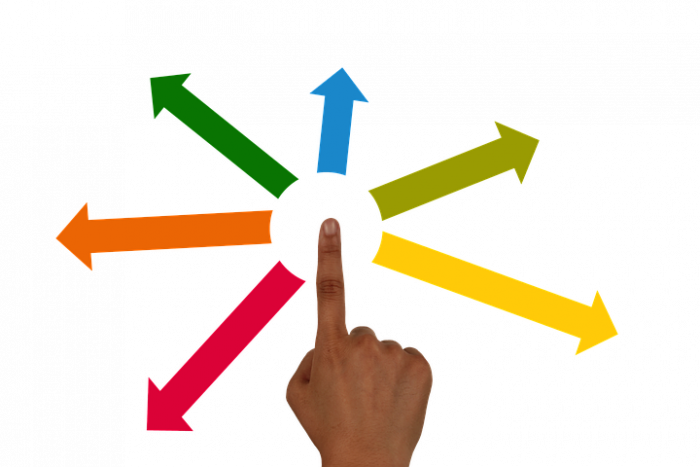 I started my dialysis life in April, 2017. We’d had some talks about treatment methods, and with my huge fear of needles I opted for PD initially. (See my earlier post) as to how I dealt with that issue). 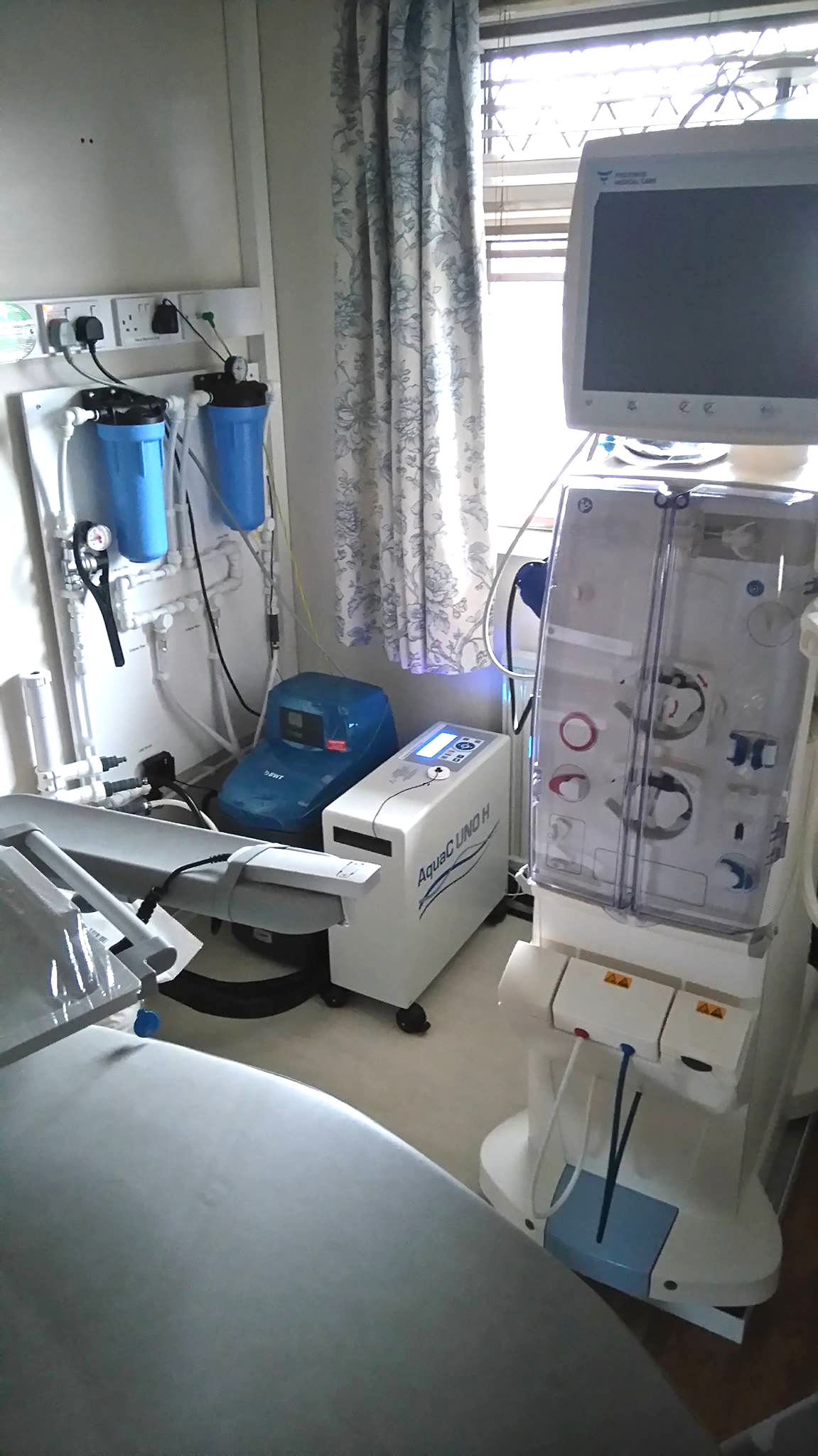 However, it was soon clear to my nephrologist and nursing team—and eventually even to me—that I wasn’t getting the clearance I needed. So, after over 6 months of the team persuading and a year on PD, I switched to HD. I’d already conceded that having an AV fistula formed was a wise precaution, so I’d had that done in advance of the switch and it was mature enough to use as soon I needed it.

I went into my local hospital on the standard 3 days x 4 hours treatment while I trained to do my dialysis at home and the necessary conversion work took place back at the house. I’m in the UK, and my dialysis unit arranged for me to have a Fresenius 5008s machine—it’s a hemodiafiltration (HDF) machine, which they told me is more effective at middle molecule removal than standard HD.

As I started on HDF at the end of March 2018, I saw an immediate improvement in my blood results overall, and am going to focus on my creatinine levels, as those are a reading we are all familiar with. On my chart, it’s clear what more treatment means for creatinine levels. For the year that I was on PD they were 1300-1400, and our aim was to get the readings below 1000. That never happened once while on PD—but there was an immediate improvement on HDF, and my April 2018 creatinine reading dipped below 1000 for the first time. It never stayed there, but this proved that <1000 was an achievable goal to work towards. 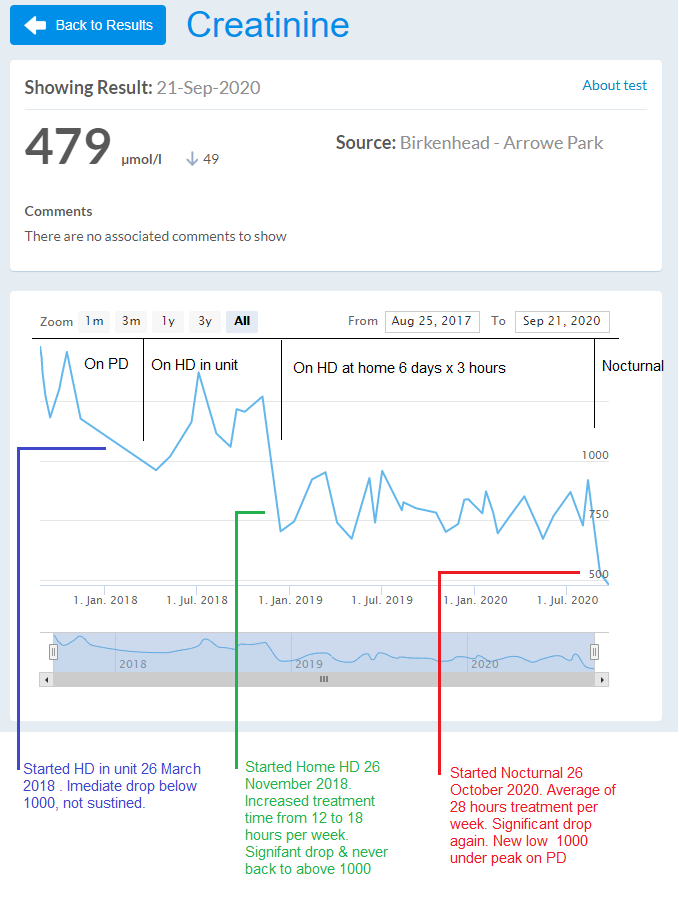 Just as importantly—perhaps even more importantly, to me—as the blood results improved, I began to feel better. We slowly removed the 15kg+ fluid overload which had accompanied the kidney failure and cleared out lots of the toxins that had built up in over a year of ineffective PD.

While I was doing my training, I began to learn about treatment and to read the blogs and info on Home Dialysis Central, and came to the conclusion that if I was going to have to endure HD (and that was how I viewed it at that time), then I wanted to get the best quality of treatment that I could from it. I realised that time on the machine was essential for good clearance and for fluid removal at a pace that didn’t dry me out and leave me feeling terrible.

I’d noticed that the more fluid I removed over 600 ml/hour, the worse I felt at the end of treatment. During the removal of my overload, we’d removed as much as 1000 ml/hour—the “safe” limit before organ stunning. Above 600, though, I was exhausted and felt “wrung out” after treatment. Below 600, I could finish treatment and get on with the rest of my day feeling fine.

I started home HDF on 26 November, 2018, and immediately increased my treatment from 12 hours per week on the machine to 18 by doing 6 days at 3 hours per day. This gave me 1.8 litres per day of what we’ve established is my “operating limit” for fluid removal. After discussion with my nephrologist and nurses, this allowed me double the standard 500ml fluid for drinking, too, which eased the tremendous pressure on my thirst, but still allowed for slow, safe fluid removal.

The effect the extra contact time had on my bloods was immediate, with creatinine showing a real drop. It has not been above 1000 since I went from 12 to 18 hours of treatment. (This drop is marked in Greenon the creatinine chart). My blood test levels were accompanied by more energy and stamina, and an improved feeling of well-being. I could feel myself actually thinking faster!

I’ve now done more than 18 months on home HD, and throughout that time I’ve had the thought that if 18 hours of treatment made me feel so much better than 12, how much better could I feel with 24 or more hours? I wasn’t willing to give over any more of my day, as the treatment/lifestyle balance is an important factor. So, I began to think about nocturnal treatment and 8 hours or more overnight 3 or 4 times a week for 24 – 32 hours of treatment and even greater removal of small and middle molecules. My small treatment room (in the picture above) wasn’t big enough for a bed and all the equipment, but in Spring of 2020, just before the COVID outbreak really took hold, we moved to a new house and the new treatment room was much bigger, which made nocturnal HD a viable option for me.

The new treatment room, at 13’ x 10’ was almost twice the size of the old one. We set it up initially with a sofa bed in it to use as a place for daytime visitors to sit & chat while I was on treatment, as well as a bed if overnight guests should ever be allowed again (after COVID restrictions on households were over), but now the idea of nocturnal treatment that had been building in me for 18 months or so had become a realistic option, and I realised I could be getting a better overall treatment if I used the sofa bed as my nocturnal treatment bed. 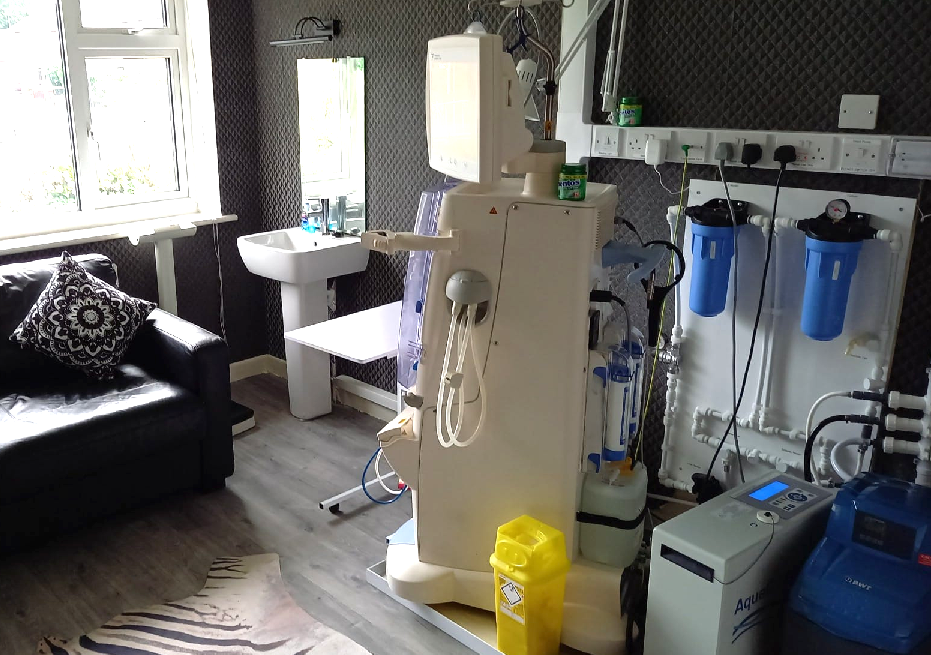 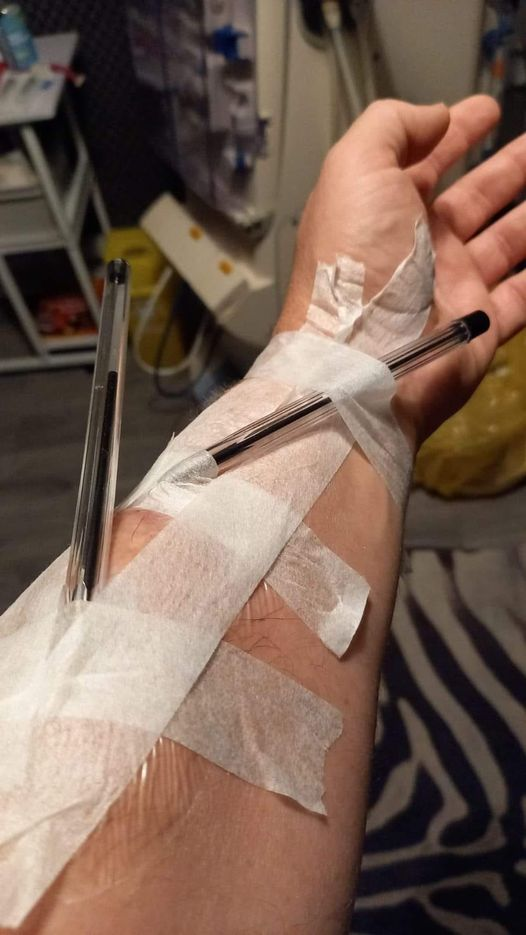 I discussed it with my nurse, and despite the COVID restrictions, she gave me the extra training I needed. The set-up is slightly different, as I now use a heparin syringe driver, which I’d never used before. I had to learn a new taping technique, as the needles and lines need to be more secure. I don’t normally sleep during daytime treatment, so am awake and alert if alarms go off. My fistula has a bend in it, so I discovered I needed help to tape securely. My wife—for the first time—became involved as my “care partner” to place one of the tapes, as I just don’t have enough hands! Here is our “dummy run,” with biros (pens) in place of lines!

The long tape to the right passing over both needle wings needs 3 hands to attach it, to get the lines out of the way and the tape securely in place. This is a flaw in my evolution that I cannot overcome, so I now need help to tape up. If I taped them one at a time, the tape securing the arterial needle wing would cover the venous needle site.

On 26 August 2020, I had my first nocturnal treatment. It took us a few attempts to get the heparin dose correct, so the blood didn’t clot in the lines overnight. Since 6 September, I’ve had consistent nocturnal treatments, which gave resulted in another significant drop in my creatinine levels (marked in red on the creatinine chart). And, these, again have been mirrored by improvements in other toxin removal and in my feelings of wellness and strength and stamina.

I’m still in the adjustment period, and am finding that noise from the water treatment is disturbing my sleep, but it’s getting better. The upside of more stamina on non-treatment days and little things like no longer having to plan to get a shower, plus the improved results, mean that it’s taken me 3 ½ years and a range of treatment options—but I’ve finally reached the place where I’ve hit the sweet spot of optimum treatment and lifestyle for me.