Financial incentives may be increasing home dialysis patient census in the U.S. 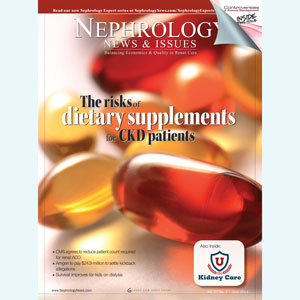 Each year, Nephrology News & Issues collects data from the largest dialysis providers in the United States. The 19th annual survey, appearing in NN&I's upcoming July issue, includes information on in-center as well as home dialysis patients. The data is collected from providers based on patient census as of May of each year.

In 2013, the number of patients on home dialysis increased for most providers. Fresenius Medical Care, for example, the largest dialysis provider in the United States, increased its home patient population (home hemodialysis and peritoneal dialysis) to 15,434 patients. That represents an increase of more than 5,000 patients from 2011 (10,812 vs. 15,434), and an increase from 7.9% of their total patient population in 2011 to 9.4% in 2013 – a 1.5% positive change in two years. The company's home population census was aided by a merger with Liberty Dialysis in 2011-2012 that added 1,400 home patients to FMC's home patients census.

The increases in the home population may be the result of changes in the Prospective Payment System launched for dialysis care in 2011. That new payment model included incentives for dialysis providers and nephrologists to place patients on home dialysis when treatment was initiated. The Centers for Medicare & Medicaid Services would pay providers more money for patients who dialysis from home, and the Medicare payment would begin right away vs. the 90 days that providers have to wait for Medicare payments for in-center patients.

Have the incentives made a big enough impact to send people home? More time is needed to see if this growing presence for home dialysis can be sustained.

This article was posted on September 2nd, 2013