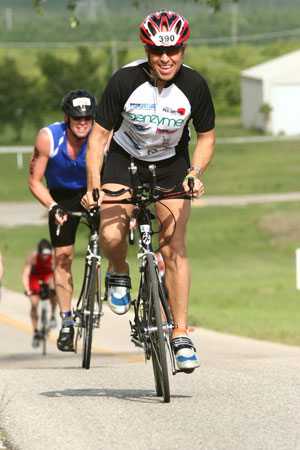 At age 10, Shad Ireland first learned he had kidney disease. Doctors told him that he wouldn't live past the age of 16. Despite this diagnosis, Ireland was able to survive and graduate college, proving he was capable of defying expectations.

Ireland is preparing for his biggest challenge yet, qualifying for the 2014 Ironman World Championship in Kona, Hawaii. In pursuit of this goal, he's faced some setbacks when health issues forced him to take some time off. However, he's returned to competitive racing and determined to achieve his goal while raising awareness about kidney disease.

It is this persistence that has led Ireland to possibly the most difficult endurance test in sports. While recovering from a kidney transplant, he took an interest in watching the Ironman Triathlon on TV. Since he was young, Ireland had aspirations of being an athlete despite being told this was not possible. He took that as inspiration and set his mind on competing in the Ironman, a race comprised of a 2.4 mile swim, 112 mile bike and 26.2 mile run.

His journey hit a major milestone in 2004, when Ireland finished the Lake Placid Ironman Triathlon in New York. In doing so, he became the first dialysis patient in the world to finish an Ironman. Now, he sets his sights on a bigger goal, but it won't come easily.

Dr. Thomas Pintar MD, who practices at the Idaho Nephrology Associates, is a Nephrologist who is trained to manage the physiological and biochemical challenges of patients living with chronic kidney disease. He marvels at what Ireland has been able to accomplish.

"Shad Ireland did the impossible in 2004," said Dr. Pintar. "For individuals requiring hemodialysis to survive, sometimes living day-to-day is often challenging enough. However, for a kidney patient to embark on a journey to physically train up to 20 hours a week for months, along with necessity of 4-5 hours of hemodialysis 3-4 times a week simply defies the imagination. Shad for all practical purposes should NOT be able to do what he has already done. To me, Shad Ireland remains not only an inspiration to the renal community, but to the community of all athletes. His goal of returning to this sport needs to be supported and studied, as it is truly an impossible task."

Ireland hopes that his story inspires others to pursue their dreams despite the obstacles. He remains on track toward his goal, recently competing in the New York Marathon on November 3. His plans in 2014 include the Coeur d'Alene Ironman on June 29, where he can qualify for the Ironman World Championship.

Ireland established the Shad Ireland Foundation in 2004 to focus children and adults on finding their own finish line. The mission statement of the foundation is to assist those with kidney disease and their families in the areas of education, prevention, awareness and access. To learn more about the foundation, please visit www.shadirelandfoundation.org.